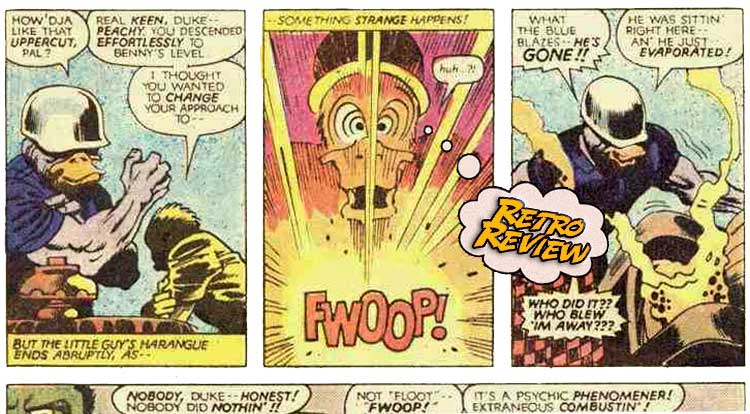 Today’s Retro Review offering brings with it the reminder that, sometimes, the behind-the-scenes events in comic publishing are as tense and dramatic as anything they put on the page…  Your Major Spoilers (Retro) Review of Destroyer Duck #1 awaits!

Previously in Destroyer Duck: Steve Gerber was working in advertising when he approached then editor-in-chief of Marvel Comics, Roy Thomas, about a gig in the four-color world of Spider-Man and friends.  Almost immediately upon his hiring, Steve changed the landscape of comics, shaping the world of minor horror character Man-Thing into the form we know it today, creating the “what knows fear burns” tagline and adding in a supporting character who would make his reputation as a writer: Howard The Duck.  Howard was a bona fide phenomenon, channeling the existential angst of the 70s into one feathered form.  By 1980, though, the situation had changed: Fired by the company, Gerber began a legal battle to reclaim his feathered progeny, but needed to raise funds for his court fees. Meet Duke Duck, another member of family Anatidae with serious angst about life in the 1970s.  In the lower left-hand corner of that panel is his best friend, The Little Guy, whose face is never shown, but whose voice is remarkably similar to that of Howard himself.  Lamenting the loss of his beloved Dinah to a “sensitive man”, Duke inadvertently irritates the rest of the bar patrons, leading to an angry warthog registering his displeasure.

This turns out to be a mistake… Duke puts the metaphorical smackdown on Benny the warthog, smashing him through the wall in rage, causing The Little Guy to sardonically congratulate him for sinking to the brute’s level, only to disappear in a puff of smoke…

The pencils in this issue are provided by Jack “The King” Kirby, just off his second stint at Marvel (which, notably, reshaped the Marvel Universe by inserting the Eternals and Celestials into continuity, as well as creating characters like Machine Man and Devil Dinosaur),  a stint which he exited due to poor treatment.  Whether or not this played a part in his decision to participate in a comic to fundraise for Gerber’s copyright suit is mere speculation, but it’s an easy jump to make.  With his best friend gone, Duke Duck faces another crossroads, and chooses to take TLG’s last known words to heart, giving up his dead-end job to become something more.  A stint in the army special forces is followed by a successful education, and his Magna Cum Laude degree leads him to a career in law enforcement. Mortally wounded, The Little Guy tells his story: After disappearing from Ginger’s bar, he crash-landed on a world of pink primates, the proverbial ‘world he never made’, where he made the mistake of signing on with Godcorp, a soulless conglomerate that seemed to relish humiliating him.  Forced to be a fool in Godcorp’s clutches, The Little Guy ended up a sideshow attraction… Any parallels between The Little Guy’s terrible adventures and Howard The Duck’s adventures post-Gerber are mostly metaphorical, but they can be pretty clearly drawn, if you think like a writer who sees a beloved creation mishandled by others.  With his dying breath, The Little Guy begs Duke to avenge him on Godcorp, a plea which Duke takes to heart…

Crashing to Earth on Staten Island, Duke is immediately noticed by a Godcorp stooge, who calls the company in the hopes of giving them another Duck to exploit, speaking directly with Ned Packer, who believes that everything is a commodity to be drained and discarded, that only the manager in charge provides any value.  It’s a withering assessment of the work-for-hire process, one best summed up by Godcorp’s motto: “Where would you be without Godcorp?”  While the wheels begin to turn on his imminent capture, Duke finds The Little Guy’s friend, the lawyer called Holmes… A blind lawyer who wears a garish costume in his spare time, who bears no legally enforceable resemblance to another character that Steve worked on in his past, Holmes welcomes Duke to the fight against Godcorp, but warns him that it will not be easy.

That warning is followed immediately by an attack by The Battleaxe (secretly Godcorp honcho Ned Packer’s mother), whom Duke dispatches with a flamethrower before embarking on a full-frontal assault on Godcorp’s HQ. Even I can’t believe that name…

Blindsided by Woblina, Duke is captured and brought to Ned Packer, who entraps him in a special device he created to kill and cook The Little Guy, as Packer believes that one must destroy and devour one’s enemies in a literal sense to defeat them.  But he didn’t count on one detail: Duke is no ordinary duck. Destroyer Duck earns his name with a no-holds-barred beatdown of the corporate creep, dispatching him with his own pressure-cooker device and a mean right cross… It’s a rather simple story of revenge, but one that leaves a hook for an ongoing series and the call to action for readers to demand it.  It was a successful ploy, as sales were high enough that Destroyer Duck spawned an ongoing (if sporadic) series, including a backup tale written by Superman creator Jerry Siegel.  This issue, being more of a jam session, features backups by Marty Pasko, Mark Evanier, Dan Spiegel and more, but also the first appearance of a familiar comic-book face… Yes, dear friends, it’s Groo in his very first adventure (albeit one written by Aragones in a mostly silent style akin to his Mad Magazine margin doodles, not yet featuring Mark Evanier’s dry wit, cheese dip and mulch jokes), making this issue a little more sought-after than other Eclipse books of the same vintage.  As a story, this one is pretty cut-and-dried, but the real fun of a story like this is in knowing what went on behind the scenes:  Is Ned Packer supposed to be Jim Shooter?  Someone else?  And what in the world is up with Thelma Ironthighs?  In any case, it’s Gerber, it’s Kirby, it’s satirical black humor, and thus Destroyer Duck #1 earns a very solid 3 out of 5 stars overall.

Post-script: By the time the Howard The Duck movie came out in ’86, Marvel and Gerber had settled their beef in an undisclosed settlement, just in time for the legendarily terrible film to ruin any marketability or cache that the character possessed, for nearly 20 years.  Gerber would return for a Marvel MAX take on his Duck in 2002, but passed away before his most famous creation returned to the spotlight thanks to ‘Guardians Of The Galaxy.’

The whereabouts of Thelma Ironthighs are currently unknown.

Very strange, very meta, and Kirby drawing talkin' ducks, plus the first appearance of a certain dunder-headed barbarian! A winner across the board...