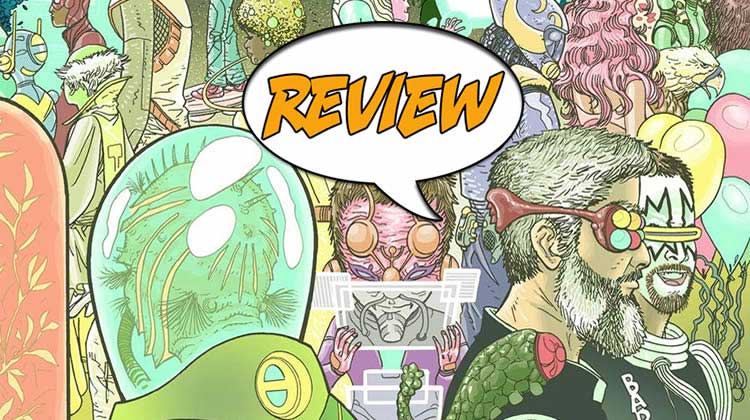 It seems like a lot of my time recently has been spent saying goodbye to comics series I really like.

Recently, I bid farewell to Marvel’s Black Knight with issue #5. I still love that character, and have for years. That won’t end here.

Now it’s time to bid adieu to a recent addition to my favorites list, and that’s Past Aways, the final issue arriving tomorrow in comics shops.

Previously in PAST AWAYS: It’s the end of the road for the intrepid Past Aways! Will infighting destroy the team and consign them to the footnotes of history, or will their heroic return mark them as the greatest explorers of all time? Find out at last!

TIME TRAVEL THAT MADE SENSE

The cancellation of this title has me wondering what it takes to make a comic buyers will like these days. I mean, Matt Kindt is a terrific scripter (as well as a great artist) on many comics I could mention, and Scott Kolins, who’s now taking on Blue Beetles, is known and admired for his work on The Flash.

If these two can’t get a series past issue nine, what’s it going to take to make a book outside the Big Two? Pay people to pick it up? Sheesh!

The good news is that this issue was put together apparently knowing this was the last. Many of the storylines and things having to do with the characters wrap up here. As always, with Mr. Kindt, I don’t always wish he’d done things the way he did – he made me LIKE these folks, after all – but what he has done makes sense.

Not only that, I loved the take on time travel in Past Aways. The folks who came from the future had to deal with the perils of doing so, and in this last issue, several of them work their way back to the time they left. Of course, things don’t always go according to plan, and not everybody gets back.

The final pages show one of the travelers in the future, and he looks at their legacy, pointing out that memories fade over time, and there remains at least one recognition of their accomplishments. Oh, that and coffee!

The characters have all been vibrant, realistic and yet unpredictable. I truly had no idea what to expect as I turned the pages, and I truly loved that!

Granted, Mr. Kindt will be moving on to Dept. H (which can also be read DEPTH, interestingly enough). And he’ll shine there just as he always does. But I’ll always hold what I like to refer to as “the little sci-fi comic that could and should have” in my heart for a long time to come.

KOLINS DELIVERS ON THE ART

It takes something for a writer/artist to turn the art chores over to another artist, but Mr. Kolins did an excellent job on Past Aways. Be it sci-fi battles to emotional connections, he delivered with some of the very best work I’ve ever seen him provide, and that’s saying something!

Sharp and clear, easy to understand while also dynamic, I loved each issue. There’s an amazing battle that takes place in this issue, and it was powerful!

There’s a wonderful little Easter Egg on the cover (and also inside) of this issue in which Kolins draws Mr. Kindt’s likeness walking to the right of the panels. I think it was kind of his way of recognizing how great a team these two made!

THE BOTTOM LINE: FAREWELL, PAST AWAYS!

I’ve been intentionally ambiguous about the details of the series and, in particular, this concluding issue. That’s because I hope some of you will pick up the collected edition(s) and any issues that might be included therein. If you love sci-fi and character-driven action, you’d love Past Aways.

I’ll end this goodbye with a story Mr. Kindt shared when I interviewed him and Mr. Kolins about this title before it debuted. He said he was having trouble coming up with the name of the series, and was with his wife and family after attending a funeral with them. His mind wandered as he listened to the conversation, but the phrase he heard over and over again was, “sorry he passed away.” After a few times, it struck him … wait a second! Passed away! Past Aways! He excitedly told his wife about his revelation, which struck some around them as odd that he could be so animated while the rest were suffering such a loss. Hey, creativity – it works when it works!

I’m glad I had the chance to experience Past Aways even though I would have loved it to last longer. It was a great ride, and who knows? Maybe somewhere down the road, the concept can live again! Hey, stranger things have happened!

Thanks to Mr. Kindt, Mr. Kolins, Dark Horse and everyone else associated with Past Aways. I loved this book! My monthly reading diet won’t be the same without it!

I loved this series from its start, sorry to see it go!