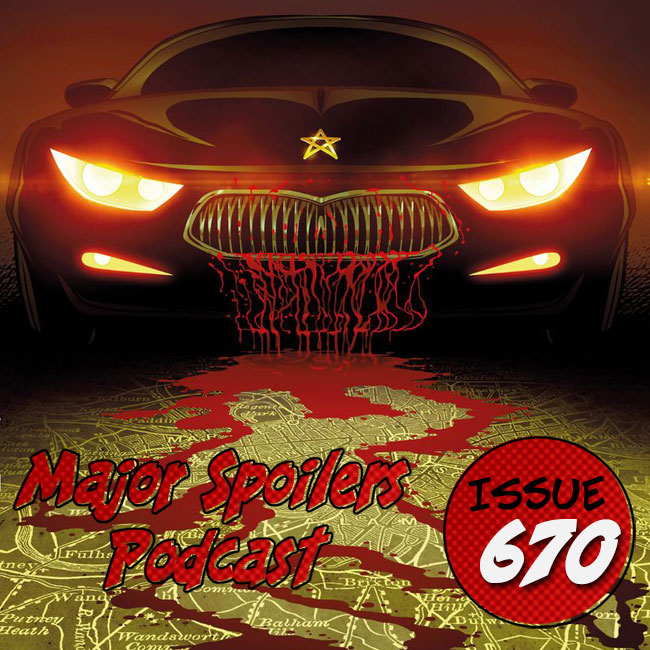 This week on the Major Spoilers Podcast: We hunt haunted cars in Rivers of London, #DCRebirth, Conan The Avenger #24, Circuit Breaker #1, Indivisible, and the All-New All-Different Silk #6 get reviewed.

REVIEWS
STEPHEN
CONAN THE AVENGERS #24
Writer: Fred Van Lente
Artist: Brian Ching
As Conan lays siege to Khauran, inside the city the soldier Valerius desperately seeks evidence that a fiendish impostor has replaced his beloved queen. Even if he uncovers the proof he needs, can Valerius gather enough allies in time to save the true queen and restore her to the throne?

When the heroic robots that saved Japan during World War IV are outlawed, they turn against mankind, waging a campaign of terror across the last city on Earth. Their creator builds one more soldier-disguised as his teenaged granddaughter-and tasks her with dismantling the marauding mechanical militia. But as she begins to question her programming, will she be the last hope for humanity, or the final nail in our coffin?

RODRIGO
Indivisible - Prototype
Indivisible is a side-scrolling RPG in the vein of Valkyrie Profile, spanning a huge fantasy world inspired by our own world’s various cultures and mythologies.

ASHLEY
All-New All-Different Silk #6
Writer: Robbie Thompson
Artist: Stacey Lee
After going toe-to-toe with Black Cat in Silk #5, Silk has no choice but to team up with the fearsome feline...when the Goblin Nation declare an all-out GANG WAR! Cat's presence in New York's underworld has caught the attention of the Goblin King, and he ain't happy!
[rating 5/5]

Major Spoilers Poll of the Week: Wielder of the Sword

DISCUSSION:
Rivers of London: Body Work
Writer: Ben Aaronovich, Andrew Cartmel
Artists: Lee Sullivan, Luis Guerrero
Peter Grant looks look your average London police officer, but he is actually a part-time wizard in a very elite branch of the Metropolitan Police. It's his job to investigate those crimes that regular cops don't like to talk about because they often involve vampires or strange things in Underground tunnels.

Peter's latest case features a self-driving killer automobile, a Serbian refugee, the Most Haunted Car in England, a handsome drug dealer with a nice paisley scarf and a seemingly harmless wooden bench with a dark past!