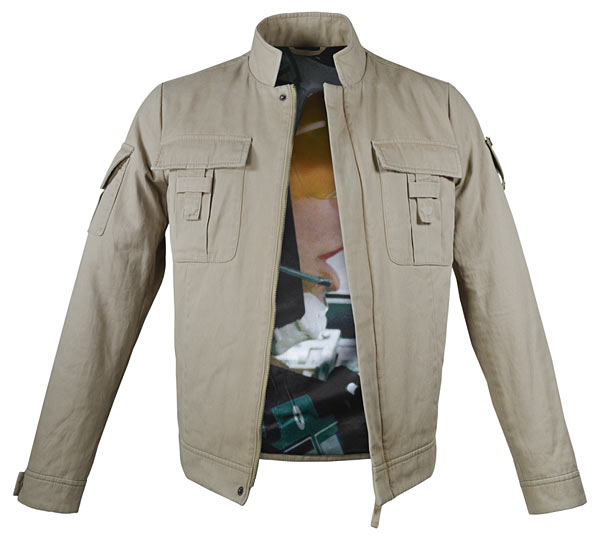 You can now wear your love for Star Wars on your sleeve with two new jackets from Think Geek. First up is the Skywalker Rebel Leader Jacket, that is a replica of the jacket Luke Skywalker wore on Bespin in The Empire Strikes Back.

100% cotton, it features a storm flap that closes over the full-length zipper. It also has an interchangeable badge system and comes with 2 rubber badges to start you off: an Alliance Starbird and an X-Wing from above. The inside lining features a painting of Luke, a print of an X-Wing schematic, and a unique serialized number on a little metal tag near the interior pocket.

If the dark side is more your style, the Imperial TIE Pilot Leather Jacket has you covered – or at least your torso covered…

The leather outer has angles and suede inserts, reminiscent of the lines of a TIE Fighter. It also has an interchangeable badge system and comes with 2 rubber badges to start you off: a TIE Fighter with a red viewport shaped like the symbol for the Galactic Empire and a large Galactic Empire symbol. The inside lining features a painting of a dogfight, a print of a TIE Fighter schematic, and a unique serialized number on a little metal tag near the interior pocket. The leather jacket also comes in sizes S – 2XL, but because it is leather, the price tag gets bumped to $499.99.

The jackets look really cool, but I’m split – do I want to join the Empire or the Rebellion? Which one would you choose, and why?