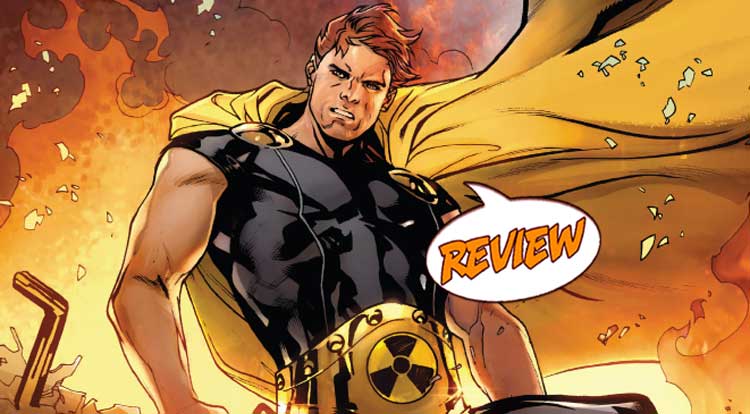 The mightiest member of the Squadron Supreme sets off on his own, to find his place in a strange new universe.  I wonder if he’s checked out any major Metropolitan newsrooms?  I hear there’s precedent…  Your Major Spoilers review of Hyperion #1 awaits!

Previously in Hyperion: “Hyperion, a hero and a teacher from another world with abilities that make him stronger and more capable than any mere mortal, is the last known survivor of his universe.  Before the destruction of his world, he lives by three precepts: Truth without compromise, thought without error and all things for the betterment of the whole.  But now, Hyperion is left on Earth, unsure of his place in it.  Is he a hero?  Is he a murder?  Taking time away from the Squadron Supreme (a group of fellow super-powered refugees) Hyperion struggles with these questions, and with his very identity.  Will he emerge the hero he wants to be or sink into obscurity?”

After the first few issues of ‘Squadron Supreme’ (wherein Hype and his pals in the Squadron found and killed Namor The Sub-Mariner for his role in the destruction of their worlds), Marc Milton has found himself questioning the methods of the Squadron, and has created a second identity for himself as an over-the-road trucker.  As this issue opens, a young woman who calls herself Doll has sought out his particular truck, drawn in by the records of a hero who haunts the highways.  Hitching a ride with Marc, she quickly finds that her past isn’t far behind her, as one of her former associates baits a trap that catches Hyperion.  Of course, given his mighty super-powers, the ambush fails, only to bring out the entire crew of a bizarre carnival, some of whom seem to have powers of their own.  They force Hyperion to sacrifice his rig, and as the issue ends, he emerges from the flaming wreckage, promising Doll that he isn’t going to fight them…  he’s going to teach them.

This is an off-the-beaten path kind of book, but one that I have to say I like: The art is really impressive, with only a couple of panels featuring the costumed Hyperion.  Most of the book takes place in his truck or on the road, with most everyone in street clothes, and the effect is very realistic.  Interestingly, there are some visual traces of ‘Supreme Power’ Mark Milton in these pages, and the idea of the super-man (but not Superman) engaging in street-level adventures is a compelling one.  This issue introduces a wild concept in the form of the strange traveling carnival, but manages to not feel ridiculous in so doing, and the script takes the interesting tack of keeping the main character at arm’s length.  It’s an approach that might not work if we didn’t have a strong point of view character in Doll, but the final effect makes me want to see more, to really get into Hyperion’s head, if such a thing is even possible.

THE BOTTOM LINE: IDIOSYNCRATIC, BUT ENGAGING

As someone who was very happy to see Hyperion officially joining the ranks of the Avengers after years of various guest-star and villain appearances (and that by half a dozen different versions of the character, to boot) I’m pleased and surprised at how this first issue plays out.  With the strength of the art alone, it’s a good series, but the script and dialogue draws me in even further, leaving Hyperion #1 with an impressive 3.5 out of 5 stars overall.  If they can keep things this entertaining, this book could be a long-runner…

An intriguing start to Hyperion's first solo adventures, with strong art and story that has much potential...