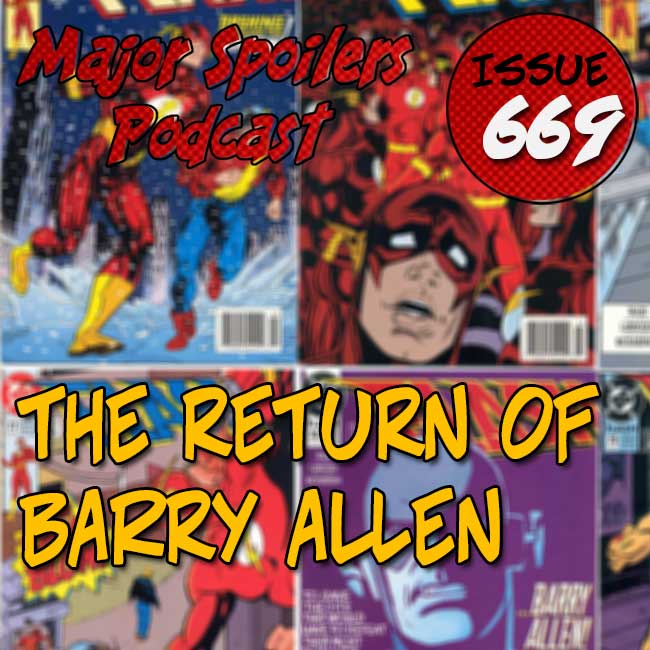 This week on the Major Spoilers Podcast: BARRY ALLEN RETURNS! Plus, Marvel’s C2E2 News, The Legend of Wonder Woman #3, The Shadow of Glass #1, Tomb Raider #2, and Superman #50. Plus, you pick the next MSP TPB!

REVIEWS
STEPHEN
TOMB RADIER II #2
Writer: Mariko Tamaki
Artist: Philip Sevy
Publisher: Dark Horse Comics
To discover the true nature of the soul, Lara is drawn into a hunt for a rare mushroom said to grant immortality. However, she’s not the only one in pursuit--the Knights of the Spore will stop at nothing to take Lara down!

MATTHEW
SUPERMAN #50
Writer: Gene Luen Yang
Artist: Howard Porter
Publisher: DC Comics
Superman returns in all his glory in this very special issue that sees the Man of Steel back to full power as he faces his greatest enemy and also comes face to face with the pre-Flashpoint Kal-El! At last, it's the meeting of the Supermen you've been waiting for!

RODRIGO
THE SHADOW GLASS #1
Writer: Aly Fell
Artist: Aly Fell
A young student of England’s greatest occultist learns her real father is in league with the devil. When Rose finds out that the man who raised her isn’t her father, she ignores his warnings about the terrible secrets of her own past and seeks answers from her childhood teacher Dr. John Dee, the queen’s occult adviser.

ASHLEY
THE LEGEND OF WONDER WOMAN #3
Written/Art by: Renae De Liz
Themyscira comes alive with the sounds of Amazons on the hunt. Will they find their prey before Diana has a chance to rescue the outsider who fell from the sky? Hippolyta stands against her foes, and announces a tournament that will change Themyscira forever as the fate of the mysterious stranger hangs in the balance.

Major Spoilers Poll of the Week: You Pick The Trade