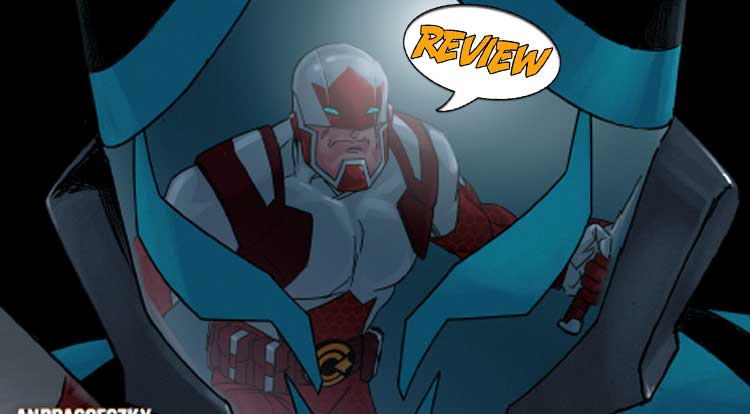 Born of the true North and tested in war, Captain Canuck is a soldier granted the choice of how to use incredible power that could alter the fate of the world…  Your Major Spoilers review of Captain Canuck #7 awaits!

Previously in Captain Canuck: “Following the fateful events at Site: Aleph, Michael Evans has ramped up Equilibrium operations, targeting Mr. Gold’s strongholds around the globe in an attempt to locate and bring him to justice.  Captain Canuck, despite harbouring doubts about Michael’s methods, has been leading these strike missions hoping to find Marla Ritchie, who was abducted from Equilibrium headquarters.  But a mysterious foe keeps beating them to each location and wiping  any useful date, leaving Equilibrium and Canuck empty-handed…

THE CANADIAN LEGEND OF OLD…

Dating back to 1975, Captain Canuck was my first introduction to the idea that our neighbors to the North had their own superhero comics, something that never occurred to my Midwestern pre-teen brain.  This new iteration of the Cap’n is described as a “ground-up reboot” in the Battlestar Galactica tradition, and it does a good job of taking the elements of the original and putting them in a more modern purview.  This issue opens with Tom “Captain Canuck” Evans in the field, chasing after leads on the nefarious Mr. Gold, while his futurist brother, Michael, prepares to address potential investors about their new venture, Equilibrium.  Things go south fast when Tom leaps into action without authorization (understandable, given that an unknown someone has been one step ahead of them at each of Mr. Gold’s former hideouts), forcing Michael to chase him down.  As the issue ends, the Captain is unaware that he is in the crosshairs of a new threat, one who seems to have powers rivaling his own…

…IN A WHOLE NEW ITERATION

When you’re launching an independent comic, it’s important that you can get the central themes of your story across quickly and effectively, and this book does that almost immediately: Rivalry between our main character and his brother; a hero driven by his own failures, as well as an intriguing science fiction setting make for a fun issue.  The big surprise for me is the appearance this issue of Philip Wise, who may or may not be the hero once known as Northguard, whose super-adventures in the 90s bore some similar themes to this story.  Add in the revamped versions of Kebec, Redcoat and the near-future setting, and this issue makes for an impressive read.  The art is really strong, too, as Leonard Kirk excels at making the armored costumes so in vogue these days look both uniform and interesting.  Captain Canuck’s new look is excellent, and all the action sequences are stellar (an upward shot of Captain Canuck and his team leaping from a hovering helicopter is poster-worthy.)  Most of all, as the issue ends, I immediately wanted to jump to the next, which is the true test of any ongoing story…

In short, this title is a very well-done revamp of the character of old, but one that remains respectful to what has come before (not unexpected, since original co-creator Richard Comely is part of the editorial team), giving us a promising espionage-themed story that doesn’t devolve into cliché.  Captain Canuck #7 is a goody, with clear and charismatic art throughout, and an interesting story, which still remains grounded and easily approachable, earning a very impressive 4 out of 5 stars overall.  Whether you’re aware of the previous Canuck stories or not, this one is worth the price of admission…

An interesting update of a character that many might not remember, with strong art and a compelling story...