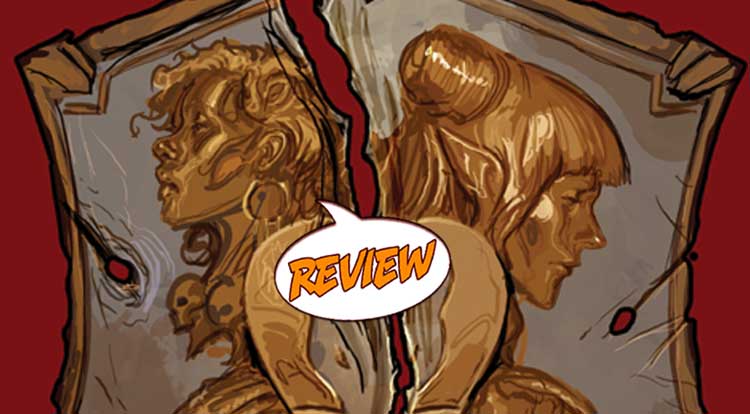 The secrets of Hannah’s past have begun to unravel.  Will the Rat Queens come apart at the seams, as well?  Your Major Spoilers review of Rat Queens #15 awaits!

Previously in Rat Queens: An adventuring part in the city of Palisade, the Rat Queens are known for their power, their resolve and their sass.  Nothing could shatter the bonds that hold Betty, Dee, Violet and Hannah together…

…or so it seemed.  Having returned to her magical alma mater, Rat Queen mage Hannah is determined to clear her father of criminal charges, even if it means the loss of her closest friends…

We open with Hannah standing trial before the high council of Mage University (Heh), accused of drawing power from a fiend of the underworld.  Hannah’s response is exactly what I expected, throwing their own judgement back in their faces, defiantly smoking a cigarette before attacking them all in anger.  “I am the conduit of living evil!  Bow to me, you @#$ing boobs!”

Transition to the present-day, as Hannah and the other Rat Queens are listening to Dee’s brother, Senoa, recounting his version of how the story went.  Turns out, Hannah did channel the power of a demon, and she did get expelled, but things are much more complex than they seem.  There are a couple of really shocking moments in this issue, as Hannah admits to using dark magic earlier, but her anger overwhelms her and some really ugly things get said.  Hannah only wants to help her father’s situation, but her actions just end up alienating her friends more and more.  I don’t want to spoil this issue for Rat Queens fans, but the last third of the story is literally a series of seemingly unthinkable moments, ending with a cliffhanger I never saw coming.

I’m a new convert to Rat Queens, thanks to repeated vehement recommendations from Ashley Robinson, and I have to say this issue is utterly devastating in all the right ways.  As impressive as the script, though, is Tess Fowler’s art, showing us every nuance of the emotion in our heroes’ argument, the carnage (both real and imagined) of Hannah’s expulsion, and her shocking transformation.  (There’s also a beautiful page showing a nude Hannah looking in a mirror that is flat-out gorgeous.)  The plotting of this arc has been pitch-perfect, moving forward to all the places I never though it would while passing straight through all the places I hoped that this book would never go, leaving me really wondering what is in store for the next arc of the book and why I can’t have the next issue right now!

Also, there are at least three scenes which left me a little bit misty, which may be a record for a single issue of comics…

The best part of a creator-owned comic like this one is knowing that this really could be the massive game-changer that it seems to be, rather than a blip in the road before returning to the corporate-mandated status quo.  This issue helps to fill in parts of Hannah’s back story (with a few choice secrets from Betty, and tears from Violet that are utterly heart-breaking) and ends in the most devastating place possible, leaving Rat Queens #15 with a very well-deserved 4.5 out of 5 stars overall. It’s a tough read emotionally, but one that makes the ride bearable with lovely art, skilled character work and a tiny bit of violence and nudity…

This one is a heart-breaker, but still full of the regular humor, character interplay and the old ultra-violence...