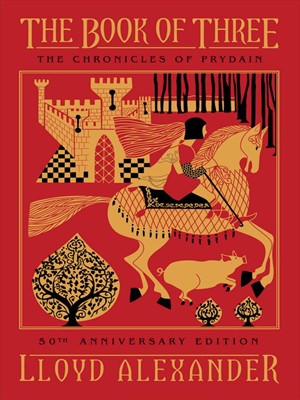 Remember the Black Cauldron animated movie from Disney? Released in 1985, the animated movie was the first to receive a PG rating, and the first to feature computer generated images. Unfortunately, the $44 million picture couldn’t recoup its cost, making only $21.3 million at the box office. So, it didn’t work as an animated movie, which is why Disney is now moving ahead with the Chronicles of Prydain as a live action series.

The Chronicles of Prydain is a five book children’s fantasy series written by Lloyd Alexander that were published between 1964 and 1968. In the series (The Book of Three, The Black Cauldron, The Castle of Llyr, Taran Wanderer, and The High King), readers follow the adventures of Taran as he grows from assistant pig-keeper to grand hero, fighting the Horned King along the way.

As an eight year old, I remember loving each of these books, but as a 15 year old I was slightly disappointed in the animated movie as it deviated wildly from the source material. Still the animation was really great, and the Horned King was so frightening that my eight year old sister ran from the theater crying.

While Disney had the rights to The Book of Three and The Black Cauldron to make the movie, the story now going around has Disney acquiring the rights to the entire series, which means we can probably expect to see a three-movie story headed our way in the near future.

According to Variety, Sam Dickerman is executive producing, but no producer, director, or writer has been named as of this report.