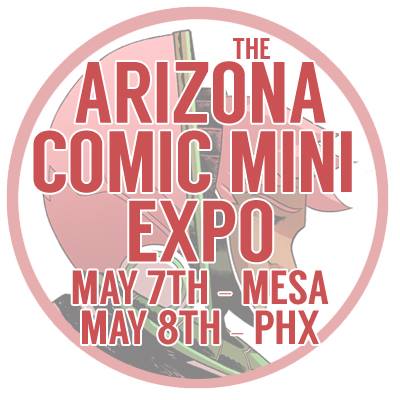 The Arizona Comic Mini Expo is back for its 5th year in the valley of the sun. The fan favorite event takes place over two days starting on Free Comic Book Day, Saturday May 7th at the Samurai Comics in Mesa and continues at Samurai Comics in Phoenix on Sunday May 8th.

Nearly twenty top comic creators will be signing comics, sketching & interacting with fans of all ages. Evan “Doc” Shaner is making his first appearance in Arizona. Evan is an artist for DC comics and his new project, Future Quest, launches in May. Mitch Gerads is making his first show appearance in Arizona and is the current artist of the DC Comics/Vertigo series Sheriff of Babylon. Mitch’s past work includes The Punisher for Marvel Comics and The Activity for Image Comics. Scott Godlewski is the artist on the DC Comics/Vertigo series The Dark and Bloody as well as the artist on Copperhead from Image Comics. Meredith McClaren is making her first ACME appearance and her work has appeared in books from Image Comics, Dark Horse Comics and Oni Press. Other guests include Jay Fotos, Marat Mychaels, Tone Rodriguez, Tony Parker, Brian Miller, Val Hochberg, Jason Gonzalez, Ben Glendenning, Ryan Cody, Jim Hanna, Michael Macropoulos, Ben Truman, & Ryan Quackenbush.

Several wonderful local businesses have partnered with ACME again this year including Samurai Comics, 3 Monkeys Print & Design, The Graduate Tempe Hotel, The National Comedy Theatre & Cheba Hut. With their help, ACME continues to be able to put on the best creator focused event in Arizona!
With guests that have done work for every major publisher in the country, ACME offers something for everyone, and it’s all for free. A mini-convention designed for the fans!