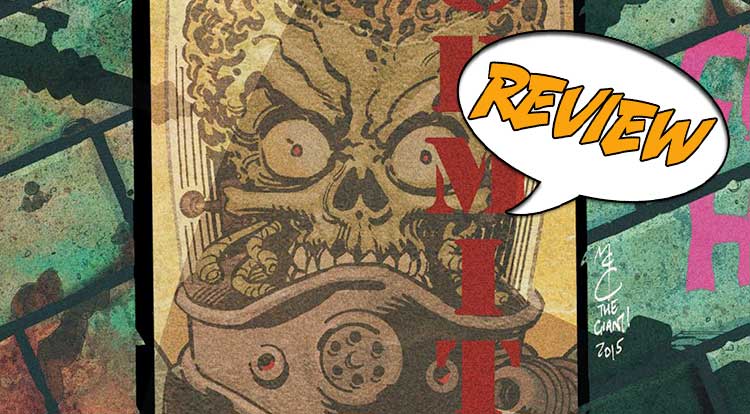 IDW Publishing’s latest entry into their ongoing Mars Attacks! stories sees the Martian invaders victorious and Earth completely bent to their will. As humans try to fight back against their new overlords, Major Spoilers examines the title to see whether it is worth your $3.99. MARS ATTACKS: OCCUPATION #1 (of 5)
Written by JOHN LAYMAN
Art by ANDY KUHN
Cover by JOHN McCREA
PUBLISHER: IDW PUBLISHING
COVER PRICE $3.99
Previously in MARS ATTACKS!: Several self-contained miniseries have been created through IDW relaying different parts of the Martian invasion. Most of these collections have been played with dark, tongue-in-cheek humor, similar to the Tim Burton films. We’ve seen some odd tales of human resistance to Martian warriors, but the end was close for mankind, as Mars succeeded in global domination.

A story written about subjugation, even from big-brained Martians, is not a story that can use a lot of humor. Sure, there’s some absurdity about the physical appearance of the Martians themselves, along with their 1950’s sci-fi weapons, but Layman was faced with a challenge of keeping the stakes high while delivering the campy visuals the series is known for. If played for chuckles, this issue would lose a lot of its punch. I can tell you, Layman succeeds brilliantly in creating a bleak, unrelenting future for humanity within the space of a few pages.

The reader is quickly introduced to the new status quo: humans loyal to the Martians are rewarded with menial (but perhaps comfortable) jobs and ongoing survival, while those who have resisted their rule are forced into backbreaking labor camps or exterminated on the spot. Kuhn’s artwork helps sell this ugly new world, as he has chosen muted colors and sharp angles to give everything a gritty, dirty feel.

There’s still a lot of human emotion on display in this issue. Our mine character is a plucky young lady whose father may or may not have perished to save her life. The fact that his fate is unknown is sure to be addressed later in the series. Issue #1, however, centers on our heroine’s adjustment to her new life of cruel circumstances. She deals with monsters of every type, from a human manipulator to Martian thugs, and by the end of the issue, she’s found herself in a position that I can’t wait to see more of in the second book. Great stuff!

Some readers expecting Slim Whitman jokes and Jack Nicholson cameos may be disappointed, as this is not a comedy issue. Rather, it’s science fiction at its best: fantastic, allegorical, and well-written.

Mars Attacks!: Occupation is a bleak look at a humorless world run by Martian oppressors.