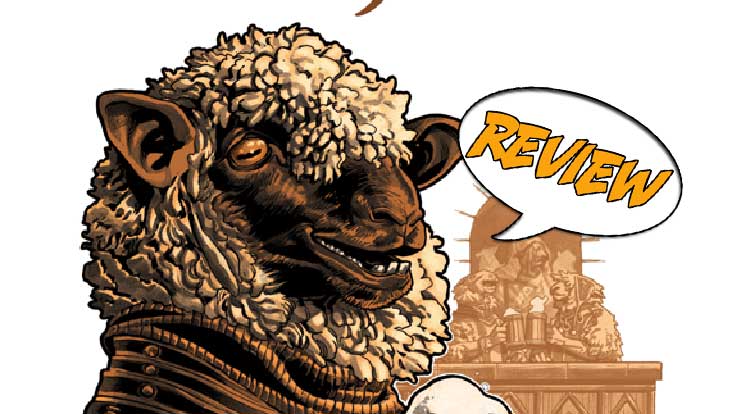 Still far from their friends, Learoyd and Dusty find themselves in a troubled Sheeptown. Will they be able to help them and save the people? Find out in your Major Spoilers review of The Autumnlands #9! Previously in The Autumnlands: Stranded on the world below, Learoyd and Dusty’s mission is to get back to a floating city. Their journey has been filled with trouble so far, all leading to them being attacked by a group of goats and left for dead.

WE SHOULD NEVER MEET OUR HEROS

With the help of Erries, a perfectly normal Sheeptown with a perfectly normal Sheeptown name, Learoyd and Dusty survive the attack from the end of last issue. However, their troubles continue, as the citizens of Erries believe their new friends to be wizards who can help them with some strange magic plaguing their town from higher up the mountain. After a more than generous feast, Learoyd accepts the quest and drags poor Dusty along. This issue almost feels like a break from the greater story that we set out to in issue one, which is that Learoyd was summoned to fix magic, but there is an underlying feeling throughout that something big, bigger than we previously thought, is going on. Still, this book is not just concerned with the crazier parts of the story, but also with building this world around us. This book gives us a look in to another portion of this world’s society, making it feel more and more like a real, lived in place. Learoyd’s ego is starting to get the better of him at times, and you get the feeling that he might believe he is some great champion.

At the heart of this story is something that I am a sucker for, and that is Dusty’s coming of age journey. He started off with the wide eyed naiveté of a hopeful child, but that has slowly been morphed by working with Learoyd. He isn’t becoming a bad or selfish person, but he is learning that putting his faith in heroes and legends can be dangerous. In his own words, “The great champion of legend – the hero we’d thought him to be – would have sallied forth just because it was the right thing to do. But this champion- I was learning that legends were a poor guide. He had reasons for all he did. His own reasons.” Busiek has given us a compelling narrator who is on not just an epic journey through the world, but through a personal journey that we get to experience.

There really is not another artist and colorist team that I could picture on this book. While Busiek has given us a great cast of characters and an interesting tale, Benjamin Dewey and Jordie Bellaire have made everyone come alive and fit in a realistic looking world. Anything that gets thrown at them, from a floating city in the sky full of an assortment of beasts to a quaint little village in the hills filled with sheep, gets handled with seemingly impressive ease. This is high fantasy at its best, where the different and unusual races look commonplace, like I could expect to stumble upon them in our own world. Beyond that, the faces are expressive in a way that should be unusual for animals to be, but feels natural and helps us to connect with the characters. There is magic in this book, because it is a window to another world that exists just as full and bustling as our own. In the moments when this book is weak, the art is always strong.

THE BOTTOM LINE: SOMETHING WICKED THIS WAY COMES

We’re on to something here, and it will be interesting to see the greater expansion of this world that is just around the corner. Issues like this provide time for some excellent characterization and world building. Dusty is probably one of my favorite comic book characters of the last few years, and I could not imagine this book without him, or without the stellar art team. The ending of the book, which I barely touched on, promises that things are about to get much more sinister, and I cannot wait.