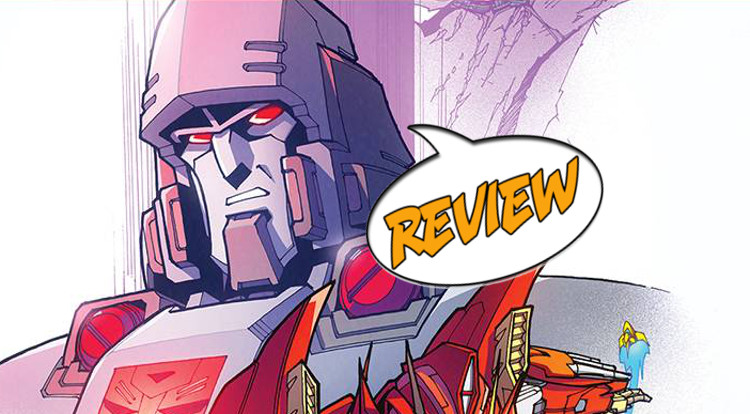 Ever since IDW Publishing split the Transformers title into two different books, Robots in Disguise and More Than Meets the More Eye, the property has seen changes like never before.  The whole brand has been unified across toys and comics, the war between Autobots and Decepticons has ended, Starscream finally is in control of Cybertron and one of the biggest changes of all: Megatron is now an Autobot.  Robots in Disguise already reached its fiftieth issue and this week it’s More Than Meets the Eye’s turn.  What does James Roberts and company have in store?  Read the review! Previously in Transformers: More Than Meets the Eye:  The crew of the Lost Light have been searching for the Knights of Cybertron for a long time.  Many things have happened along the way: deaths, time travel, alternate universes, and more deaths.  Now the crew continues their search…

REMEMBER WAY BACK WHEN?

James Roberts’s strengths are his ability to write resonating emotional stories, great characterization and having the near uncanny ability to tie plot threads together.  Many seeds that were planted over twenty issues ago see the light of day in this giant size issue.  Roberts works his magic in the beginning, starting with an emotional opening as other Cybertronians watch the broadcast of each Lost Light crew member’s will.  Seeing many of the major characters say (what we assume) is their last words and how they want to be buried is extremely dark as well as a brilliant set up.  We don’t know why they’ve sent the message, but in six hours they’ll be dead.  The message was sent three weeks ago.  It appears that someone is making them record these messages but who is the mystery.

Anyone who has read More Than Meets the Eye before knows this is a fairly standard Roberts set up, and he is a master at the hook.  The story then flashes back and the rest of the issue leads closely to the opening.  My biggest criticisms are that given that this is a seminal issue (over-sized, raised cover price, etc.) nothing inside particularly feels extraordinary.  The issue ends on a giant cliffhanger, one that is spoiled on the back cover too, and it reads like a usual above average More Than Meets the Eye issue.  Compared to the Transformers #50, this is a slight letdown.  That’s not to say the issue isn’t great; Roberts knocks it out of the park.  The second concern is one that plagues the title: new readers will be in the dark, lost.  As great as Roberts is about tying all those stories together, even I can’t remember all the little details and I’ve read every issue.  I can only imagine a new reader would be overwhelmed.  Regular readers will find this enjoyable, though whether it’s worth $7.99 is another matter.

Illustrating a Transformers comic is an extremely difficult task, beyond just drawing varying complex bots.  If you don’t have the panels large enough, space is crowded and the characters become hard to recognize.  Luckily, Alex Milne doesn’t fall into that trap often and there are few times when distinguishing crew members is a difficult task.  More Than Meets the Eye has a staggeringly large cast of characters so being able to distinguish them is extremely important for the reader.  Milne allows the action giant panels to spread across pages and even conversations with smaller panels are limited to one or two characters at a time.  There are a few occasions where the problem rises but I’ve come to realize that’s probably unavoidable.  Brendan Cahill does a great job with his story as well and while his scenes are smaller, he makes all the Transformers recognizable.  Each artist also does a fantastic job at making the characters emote, even ones with face plates and visors!  The coloring is bright and vivid and what is expected from the book.  Great job from the art team all around.

Transformers: More Than Meets the Eye #50 is a great issue of the series.  It has ranges of emotion, a good mystery, and plot threads from many issues ago that are finally tied together.  While it’s a fun an enjoyable issue, it still reads like a regular issue of the series.  For the fiftieth issue, and the bloated cover price, I expected a bit more.  In fact, based on the cliffhanger I’m actually more excited for the next issue.  It makes me wonder why they didn’t combine the two rather than have the second story as a back up.  Longtime readers will certainly love this, but new readers are sure to be lost and while the cover price is a bit overblown, Transformers More Than Meets the Eye #50 is a solid 4 star issue.