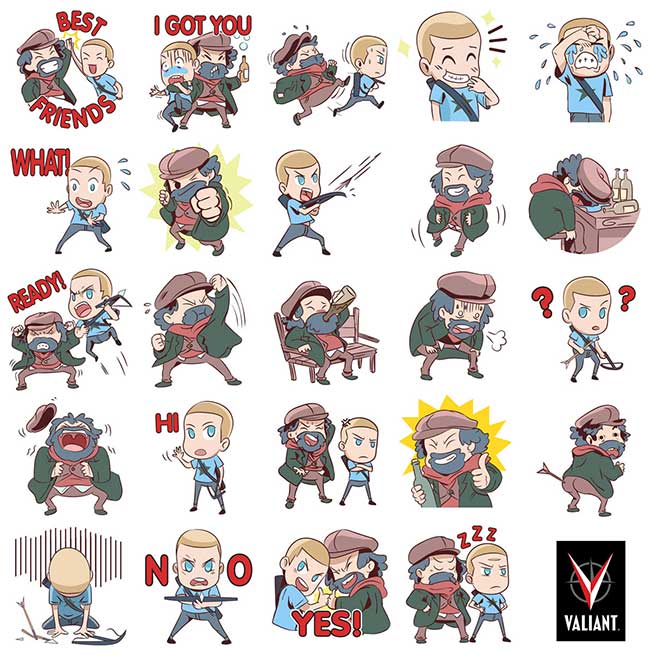 Valiant Entertainment is proud to announce the release of the all-new Archer & Armstrong digital emoji sticker pack – created in collaboration with Swyft Media and debuting on the Valiant Heroes Emoji App on April 1st! Just in time for the launch of Archer & Armstrong’s new smash-hit ongoing series, celebrate the return of one of the most legendary duos in comics history by downloading this exclusive, one-of-a-kind digital sticker pack as a FREE, limited-time addition to Valiant’s emoji application in the iOS App and Google Play stores.

Now, for the first time ever, fans everywhere can add a fearless new element to their mobile messages and express themselves with a whole new range of emotions as only Archer & Armstrong could! You’ll laugh, you’ll cry, and maybe you’ll even team up with an adventuring immortal to prevent the world’s next great cataclysm…and make it home in time for Happy Hour!

“Archer & Armstrong are two of the most beloved characters anywhere in the Valiant library and with good reason,” said Russell A. Brown, Valiant’s President of Licensing, Promotions & Ad Sales. “Their heart, heroism and humor have earned them dedicated fans all over the world, and Swyft Media has perfectly captured each of those qualities with the emoji art of this digital sticker pack. No reader will want to miss this hilarious way to communicate with fans old and new.”

As the latest addition to the Valiant Heroes Emoji App – currently available for iOS and Android – the Archer & Armstrong digital sticker pack is fully compatible with Facebook Messenger, WeChat, Viber, LINE, Skype, WhatsApp, and more, as well as standard texting and SMS. Standard text and data rates may apply.

NOW: Archer is about to set off on his most dangerous mission yet – a quest into the mystic reaches of Armstrong’s bottomless satchel to liberate his friend and comrade from the clutches of the mad god Bacchus! Imprisoned in Armstrong’s satchel for centuries, Bacchus now commands a legion of monsters, goblins and golems bent on escaping back into the world of man and enacting revenge on their captor… Can Archer single-handedly combat the godly embodiment of intoxication himself – and rescue his best buddy – without becoming lost amongst Armstrong’s endless repository of bizarre artifacts and historical oddities in the process?

The answers await on Wednesday, March 16th in A&A: THE ADVENTURES OF ARCHER & ARMSTRONG #1 – the FIRST ISSUE of an all-new monthly series from rising star Rafer Roberts and superstar artist David Lafuente! Then join the adventure of a lifetime and download the Valiant Heroes Emoji App with the all-new Archer & Armstrong digital sticker pack – available for FREE in iOS App and Google Play stores on April 1st, 2016!

Valiant Entertainment is a leading character-based entertainment company that owns the largest independent superhero universe in comics. With more than 81 million issues sold and a library of over 2,000 characters, including X-O Manowar, Bloodshot, Harbinger, Shadowman, Archer & Armstrong, and many more, Valiant is one of the most successful publishers in the history of the comic book medium. Today, the company’s characters continue to be forged in publishing, licensing, film, video games, and beyond. Valiant consistently produces some of the most critically acclaimed comics in the industry and has received numerous industry awards and accolades, including a Diamond Gem Award for Comic Book Publisher of the Year. In 2015, Valiant announced a multi-picture deal to bring Bloodshot and Harbinger to the big screen as feature films. Visit Valiant online at ValiantUniverse.com.

Swyft Media helps brands and advertisers become a part of the world’s largest conversation by creating and distributing branded content that consumers want, love and share with friends across a wide variety of mobile apps. To date, Swyft has worked with more than 300 popular global brands such as 1-800Flowers, MillerCoors, Sony, Interscope Records and SEGA to create deep consumer engagement through branded emoji and keyboards. The combination of Swyft’s mobile marketing platform and expertise helps brands and advertisers drive highly engaging, measurable and amplified campaigns, with the ability to reach nearly three billion consumers worldwide. Through its relationships with approximately 60 application partners, Swyft boasts one of the largest opportunities for brands to reach younger consumers in a way that feels natural and unobtrusive. For more information, visit: www.swyftmedia.com or follow us on Facebook and Twitter. Swyft Media Inc. is a wholly owned subsidiary of Monotype Imaging Holdings Inc. (NASDAQ: TYPE).