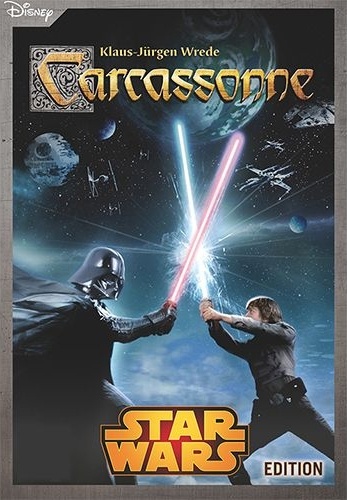 [Gaming] Carcassonne: Star Wars will be a one time run

If you are a fan of Carcasoone (and really, who isn’t?), and you love Star Wars, then you are about to have a peanut butter cup moment as the two properties will collide in Carcassonne: Star Wars this fall. ICv2 has all the news about Z-Man Games securing the rights to release the game with the Star Wars skin, and it seems like a perfect match. Instead of Roads, Robbers, Cities, Knights, Cloisters, and Monks, the Star Wars version will have Trading Routes, Merchants, Asteroid Fields, Explorers, Planets, and Conquerors.

Three factions exist for the game: two Empire colors (black and white), two Rebel colors (red and green), and one Bounty Hunter color (orange). Factions symbols on certain tiles provide bonuses to that faction to control tiles: when points are allocated, die rolls based on how much influence your faction has in that placement affect scoring, though all involved get some points.

Here’s the part that will be most important for those wanting to get their hands on the game – Z-Man will only get one chance to release this game as they have a single print run agreement with Disney. While the exact release date is not known, Z-Man Games expects it to shop in late 2016; just in time for Star Wars: Rogue One, the holiday shopping season, and family get togethers.

I’ve enjoyed the iOS version of the game on Apple devices, and with the home network gameplay, everyone at the Major Spoilers HQ has enjoyed placing tiles and claiming territory. With at least half the HQ loving Star Wars, I’m sure this game will make its way onto the game shelves, and possibly even an episode of Munchkin Land.