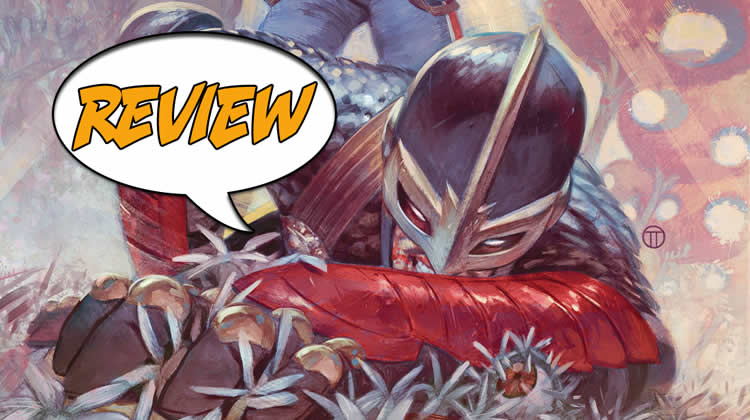 Back when the first issue of this comic appeared in November, I reviewed it, noting that I had high hopes for the series. After all, I’m a big fan of the Black Knight, and have been for years.

Sadly, this is the final issue of the current series. Sales didn’t maintain a level where it could continue, so I thought I’d give my final thoughts about it all.

Previously in BLACK KNIGHT: The Ebony Blade may be out of sight, but that doesn’t mean it’s out of mind! Can Dane live a life unaffected by the sword, or will fate step in?  Find out here!

THE MAIN CHARACTER WAS ACTUALLY THE SWORD

During my previous review, I said the following: “I continue to struggle with the notion of the cursed sword, though. He can hit people with the ‘flat’ of his Ebony Blade, but the temptation to use it to kill is something he has to fight constantly. If I were him, I’d get Dr. Strange or someone else magical to break the curse. Still, using a sword in a comic is always something dangerous because, like the Human Torch and fire, a parent might worry that his or her child would take a knife or sword and start stabbing others with it. I’m going to be very interested to see how this is handled here.”

This fifth issue shows that even someone as virtuous as Steve Rogers/Captain America can be overwhelmed by the Ebony Blade’s influence. Dane Whitman talks him out of it, which is kind of ironic since Dane himself is unable to get away from it. In fact, there’s a sequence in which Dane states that the blade “knows who it truly belongs to,” and that’s him.

As the book comes to its conclusion, the Avengers return to the regular Marvel Universe, leaving Dane behind with the blade. He’s in charge of this little portion of Weirdworld, apparently not to return to the Marvel U anytime soon.

I came away with a sinking feeling that the star of this comic was not Dane Whitman/Black Knight. Instead, it was the Ebony Blade itself since everything that happened in the issue (and, looking back, in previous issues as well). It should have been titled “The Ebony Blade” instead, in my opinion.

See, what draws me to the Black Knight is the adventure aspect of the character. He’s righting wrongs, fighting the bad guys, being an Avenger. Instead, ever since the addition to the Ebony Blade curse was first written into the character, he’s an addict, barely able to keep from killing people. That’s NOT the Black Knight I really have grown to have great affection for.

Now, I’ve really liked Frank Tieri’s scripting. And I’m pretty sure this direction comes down from Marvel Editorial, but I could be wrong. Still, what makes the hero different from everyone else in the Marvel U? His sword, of course! But as I mentioned earlier, Marvel doesn’t want to have fans go around bearing a sword, so they make it a negative thing, a REALLY negative thing.

Then, too, Black Knight is a KING in this circumstance. That just sits wrong with me. He ought to be a solider instead of a general, in my mind. Sigh.

Deadpool was in this book, too, but that didn’t help at all! Yikes!

Just like the premiere issue, I found this book to contain strong art and an excellent painted cover.

I have to say, though, that Dane’s new armor never really grew on me. I have a feeling the more intricate design was to make it seem more like the suits of armor in videogames and the like. I much preferred the helmet on the cover to the one inside because it resembled the previous, cleaner, streamlined version of it.

The colors were always tremendous in Black Knight. I’ll miss the art a lot, but I’m sure all these folks will appear in other Marvel titles very soon!

So, Black Knight, this is farewell again, for now! It was great for five months to get to read about you and see you do something!

Where do we go from here? Here are my suggestions, and we’ll see if anything comes of it.

First, make Dane an adventurer. There are a LOT of magical/medieval adventures going on in gaming and other comics, so why not let him become a soldier in a magical tale in a magical Marvel realm? Not everything must take place in New York City, after all!

Second, just like Tony Stark’s heart problems, get rid of the curse forever! In no way does it make the character relatable or even interesting! I think the sales bear that out!

Third, don’t leave him in Weirdworld! I think the time for that being of interest in Marvel has passed, much like the ninth issue of Secret Wars. We’re done with that! Move on!

Fourth, have him fight menaces that he CAN use his sword on! Dragons, creatures that can re-generate body parts, and other mystical monsters would be perfect for him to take on!

I always feel disappointed when a favorite character fades away for now. I own two or three Black Knight statues I’ve loved since I first saw them, so I’ll enjoy looking at them until Dane Whitman comes back to Marvel. Thanks to the creative team for using what you were given to the best of your abilities, and if you can give Black Knight another chance, please do it!

The final issue in the current run of Black Knight prompts me to make suggestions for next time!