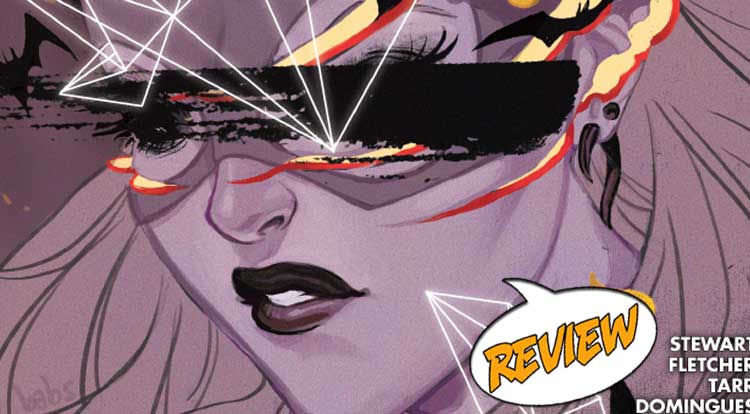 A journey into the mind of Barbara Gordon, thanks the villainous Fugue…  Your Major Spoilers review of Batgirl #49 awaits!

Previously in Batgirl: Last issue, Black Canary (Batgirl’s former roommate) returned to Burnside to hang out with her old pal, engaging in superhero antics as a team, but certainly not the Birds Of Prey.  Unfortunately, their mission included a battle with the memory-altering villain known as Fugue, a conflict that left Barbara Gordon trapped in an illusionary world, unresponsive…

As a fan of comic books, I always love it when creative teams do something unique and creative with boundaries and limitations of the medium, and this issue is a fun example: We open in the mindscape of Barbara Gordon, still under the spell of Fugue’s powers, as her friend Frankie tries to help her back to reality.  The scene in Barbara’s mind is drawn by Horacio Domingues, but when things snap back to reality, we have the work of regular artist Babs Tarr, and each subsequent trip into Barbara’s mind has a different artist, with each subsequent failure snapping us back to the mainstream reality.  With the help of Black Canary, Frankie comes up with a desperate plan: Use the copy of Barbara’s mind that turned into a malevolent A.I. to help repair the damage to the real Barbara’s mind.  We see that Barbara’s memories are being rewritten by tragic ones, leaving her worried that her father has died, that all of her friends are gone, and (depending on how you read it) that she was attacked and left paraplegic by The Joker.

IS IT A RETCON OR ISN’T IT?

It’s a subtle moment, but a meaningful one, and the implication that ‘The Killing Joke’ may no longer be in continuity is one that I truly enjoy, especially given how much that story has overshadowed Batgirl’s history ever since.  Most importantly, the story allows the reader to imply the moment or not, whichever is their personal preference, using the power of ambiguity to its best advantage.  The art teams this month are also very impressive, with seamless transitions from reality to fantasy and back, as well as finally getting an explanation of who and what Fugue actually is.  Even better, the issue ends with Black Canary, Bluebird and Spoiler joining Batgirl for a final assault on the villain in next month’s big #50 issue, a moment that I hope deals with him once and for all.  (Given his knowledge of Batman’s secrets, I’d put the odds of his survival at about 15% at best.)

THE BOTTOM LINE: NOT SURE HOW I FEEL ABOUT IT

All in all, this is a really fun issue structurally, and the maybe-kinda retcon moment is one that I’m of two minds about.  Then again, since it’s all in how you read it, I suppose however I end up feeling is how I can interpret the story, leaving Batgirl #49 with a very solid 4 out of 5 stars overall.  It’s a lovely issue, full of inventive visual devices and promising some kickass female superhero action next time around, so at the very least the issue is a success for me.

A fascinating read technically, with interesting implications and what may end up being a new status quo for Batgirl...