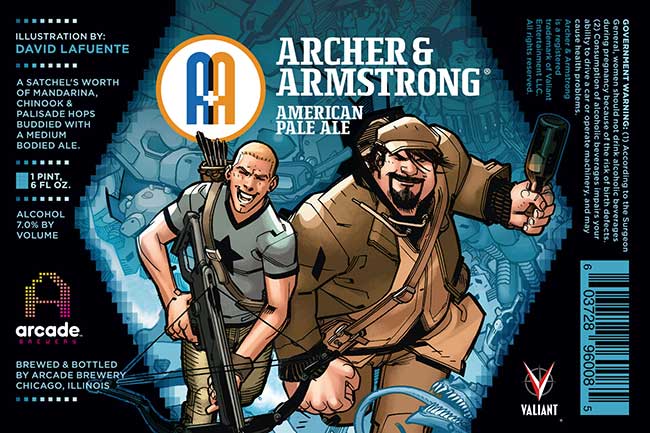 [Drinking] Archer & Armstrong get their own APA at C2E2

Drinkers, rejoice! When you attend C2E2 this year, you’ll be able to enjoy the Archer & Armstrong American Pale Ale thanks to Arcade Brewery and Valiant Entertainment.

One’s an immortal libertine with a lust for the finer things, the other is a teetotaling ex-assassin with a heart of gold…and now Arcade is perfectly embodying their dysfunctional partnership with a medium-bodied ale like no other! Hopped with Columbus, Chinook, Palisade, Cascade and Mandarina, Archer & Armstrong American Pale Ale builds on a light malt profile to create a complex and wonderful citrus/tangerine character. Clocking in at 7.0% alcohol by volume, Arcade’s first Valiant-inspired ale has all the fight of a long night out with Armstrong…but is slightly sweet enough to keep Archer in the game too!

The APA creation will make its convention debut on Saturday March 19th from 7 to 11 pM at Headquarters Beercade’s River North location (213 W. Institute Pl., Chicago, IL 60610). What’s better than drinking a beer that is inspired by and features art of your favorite indie comic characters? A portion of the proceeds will be donated to Hope for the Day, supporting its suicide prevention outreach and mental health projects. If you want to go, you will need to RSVP at Facebook or Eventbrite.