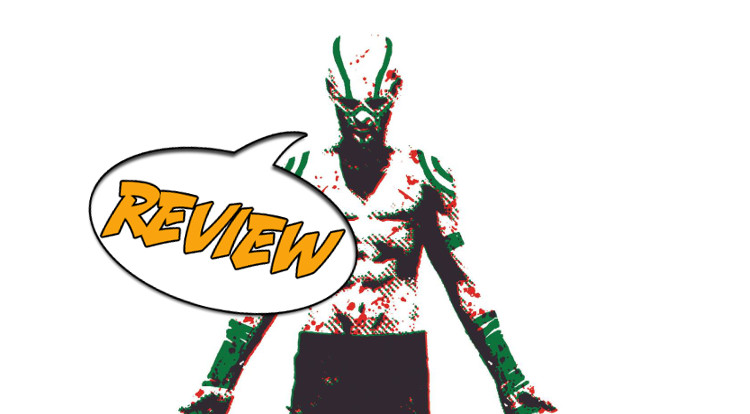 Way back in October Warren Ellis wrote an awesome debut issue for an ongoing Karnak series.  This is issue two.  Has the four month wait been worth it?  Read on and find out! Previously in Karnak:  Karnak has been given an assignment by S.H.I.E.L.D. to rescue an Inhuman child who has been kidnapped by the I.D.I.C., a dark and secret organization.  Karnak agreed to rescue the boy as long as he could train him at the Tower of Wisdom.  Easy enough for a man who finds the flaw in everything.

Man was I anxiously waiting for this issue to hit my hot little hands.  I’ve never cared about, nor read any other Inhuman comics before Warren Ellis’s Karnak.  He managed to take something I was completely uninterested in, made it interesting and the character cool.  So was this issue worth a four month wait?  Probably not, but it’s a damn fine issue.

The first half of the book and some of the middle is Karnak fighting his way through the warehouse where the abducted boy is believed to be held.  It reminded me very much of the movie The Raid; one man taking on a building full of bad guys.  It’s a visceral, violent and bloody fight and I loved some of the unique ways that Karnak dispatched his foes.  Ellis then introduces one of the most Warren Ellis ideas ever: Zen Gunnery, the power of shooting bolts of lightning from your hands.  The difference here is that the monk using the power holds his hands as if he was holding a rifle.  It’s awesome and a totally crazy unique idea that I’ve never seen before.  Ellis writes Karnak extremely cold and emotionless and I love when he interrogates others.  It’s extremely effective and quite scary.  The way Karnak ever so lightly touches the stone stuck in the monk’s face is almost cringe worthy.  My only problem with the issue is the ending is a bit vague.  Part of it may be the art shift but the meaning for Karnak to sit and drink water at a restaurant and place his hand on the window after seeing two women kiss was lost on me.  I would guess it is to not see the affection taking place but I could be totally wrong.  Still, I can’t wait for issue three and I really don’t want to wait another four months for it.

THE FLAW IN FOUR PAGES

Imagine my surprise when I saw that there were two artists on Karnak #2!  Gerardo Zaffino illustrates the majority of the book and it looks wonderful with his signature sketchy style and unique layouts.  Why Fuso was even needed on this issue considering its delay is beyond me and it’s even more baffling because he draws only four pages.  Zaffino does some great effects during the fight scene, making body parts and skin bend or morph as Karnak strikes them.  It really lends to the brutal nature of the fight and makes for some cringe worthy moments.  The coloring is dark and moody but never hinders the storytelling and Zaffino definitely has a European flair.  Unfortunately, Antonio Fuso’s pages just don’t hold up.  They look flat and like they were colored by another person, even though Dan Brown is the only one credited.  It hurts me to say it because I loved Fuso on the GI Joe: Cobra books, but this here just doesn’t work.  I obviously don’t know for sure, but it seems like an editorial mandate of “Just get it done and get it done now.”  Unfortunate for a book as late as it is.

BOTTOM LINE:  STILL A TOP CONTENDER, IF IT STICKS AROUND

Warren Ellis is doing another fine job at taking an existing Marvel character and making them interesting with a unique voice.  Much like he did with Moon Knight, Karnak is mixing things up with the character and I’m digging the changes. The artwork by Gerardo Zaffino is fantastic and has so many original ideas in it that it is a major disappointment he didn’t complete the whole issue.  I’m not sure what caused the delay but I really want this creative team to stick around.  This is one title I don’t want to lose.

Warren Ellis has made Karnak a great title with a revamped character that is cold and brutal. Issue two has great action and the majority of the artwork is great. I hope the delays don't continue.