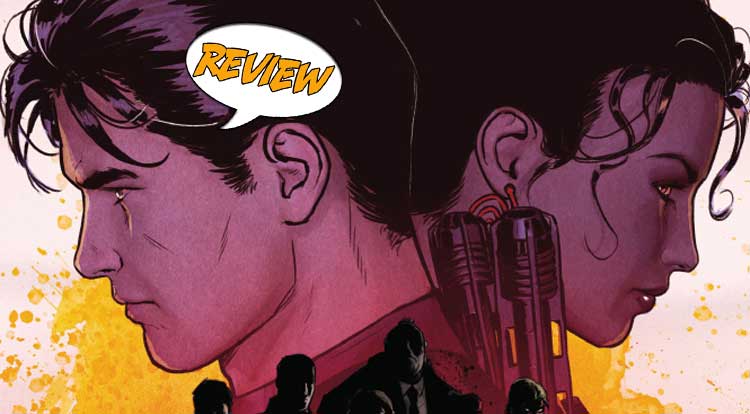 Dick Grayson has brought the fight to a rogue spy agency, one whose leader is a familiar face in the DCU…  Your Major Spoilers review of Grayson #17 awaits! Previously in Grayson: After his “death” during the events of ‘Forever Evil,’ Dick Grayson is a ghost, a man who doesn’t exist.  Now, working for the espionage agency called Spyral as Agent 37, he goes after the menaces that other superheroes can’t, won’t, or don’t even notice.  In his role as super-spy, he has crossed swords with a number of faces familiar to DCU readers, including Max Lord, once again the head of Checkmate.  Now, he’s in the jungles of Honduras trying to find out the truth about recent spy clashes…

This issue opens with the first of several familiar characters, as Grifter (who works for The Syndicate) interrogates the prisoner TAO (who, if you’ve read the old WildCATS stories, is someone to never, ever trust) about what Spyral’s Helena Bertinelli is up to.  One of the things she’s instigated is sending our hero, along with a new Bronze Tiger, into the field to investigate strange doings in Honduras, where Grayson is forced to fight mutated C’thulul/monkeys and Frankenstein, agent of S.H.A.D.E.  In short, there are far too many covert agencies in the New 52 DCU.  While Grifter tries to avoid TAO’s manipulative ways, Grayson and Tiger take down Frankenstein, with all roads leading to Helena Bertinelli, who is totally not The Huntress, you guys.  As the issue ends, Grifter and Grayson have crossed swords, with both men worse for wear, while TAO has made his recommendation of how to deal with Spyral: Kill Helena Bertinelli!

There are a lot of nice moments during this issue, with TAO, Maxwell Lord and Bronze Tiger proving particularly impressive from a character standpoint.  Carmine Di Giandomenico does really good work with the art, making all the combat sequences look amazing, and delivering great facial expressions throughout.  His work reminds me a bit of Scot Kolins, but with a slightly cleaner line, and it makes for some fun sequences (as well as a terrifying moment where Grayson, having faced Grifter’s telepathy, is bleeding from both eyes.)  I don’t pretend to understand all the internecine spy shenanigans in this issue, but in a story like this one, that just adds to the fun of secret backstabbing espionage thingamas.

THE BOTTOM LINE: COMPLICATED, BUT INTERESTING

Given my enjoyment of Frankenstein, my enjoyment of hissing at Max Lord’s perfidy and my cautious appreciation of the Bronze Tiger, this issue is right up my alley, even if Grifter has historically left me cold.  With Rebirth visible on the horizon, this could be the end of Grayson The Spy, and gearing up for a giant chess-game spy-agency war might be a great way to clear the decks, leaving Grayson 17 #with a better than average 3 out of 5 stars overall.  Based on this issue, I may be back on board the Grayson bus, at least for a few issues to come…

A cavalcade of familiar faces in play as Grayson stands at the middle of a clash of multiple spy agencies...