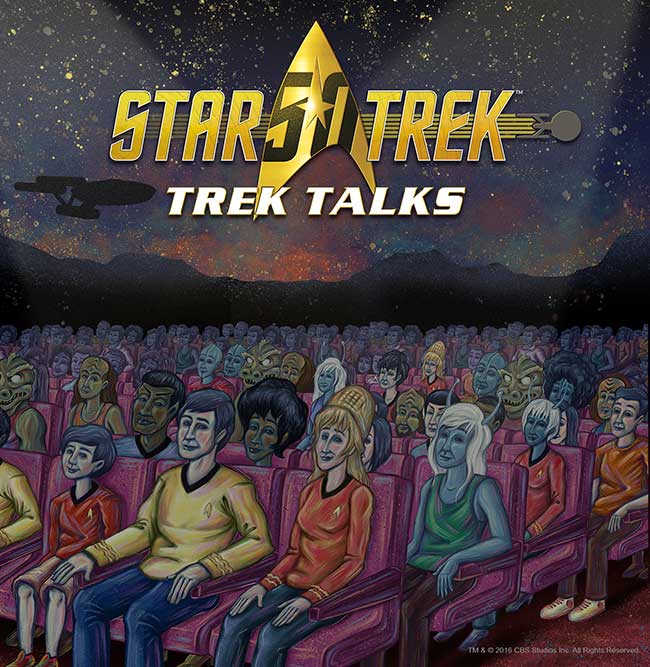 CBS Consumer Products announced today the creation of Trek Talks, an initiative designed to bring fans of Star Trek together for a new and exciting live event program that will explore the impact and influence of the franchise over its 50-year span. Trek Talks will feature leading thinkers to dive deep into the franchise’s influence on technology, science, society, culture, and more through a series of lectures across the globe.

Trek Talks will be locally produced and hosted by academic and entertainment institutions including colleges and universities, science museums, and pop culture centers and festivals as well as other non-profits and commercial corporations. Organizations (in partnership with CBS) can choose a topic from a group of themes that cover the full scope of Star Trek’s influence or can develop their own theme. Themes include:

“Star Trek, reaching beyond pure entertainment, has helped shape our collective perspective,” said Liz Kalodner, Executive Vice President and General Manager of CBS Consumer Products. “From technological advancements to racial and economic equality, Star Trek has broached a broad and varied range of subjects over the years. These Trek Talks will address its impact and provide an entertaining and educational forum to discuss such influence.”

For more information or to become a partner visit: www.TrekTalks.com

Star Trek celebrates its 50th anniversary in 2016. Born from the mind of Gene Roddenberry, the original Star Trek series debuted on September 8, 1966 and aired for three seasons — a short run that belied the influence it would have for generations. Launching the careers of William Shatner and Leonard Nimoy, the series also broke new ground in storytelling and cultural mores providing a progressive look at topics including race relations, global politics, the environment, and more. It spawned five more television series and 13 feature films spanning the course of half a century.

Beyond its impact on the entertainment landscape, Star Trek has also inspired some of the greatest minds steering the direction of our modern world and sparking the biggest technological advancements of our time such as the cell phone, universal translator, smart watch, tablet, sonogram, and countless other inventions. Those who cite Star Trek as an influence on their lives include Stephen Hawking, Neil DeGrasse Tyson, Elon Musk, and countless others.

A new Star Trek television series, produced by CBS Television Studios, will launch with a special preview broadcast on the CBS Television Network in early 2017. The premiere episode and all subsequent first-run episodes will then be available exclusively in the United States on CBS All Access, the Network’s digital subscription video on demand and live streaming service. The next chapter of the Star Trek franchise will also be distributed concurrently for television and multiple platforms around the world by CBS Studios International.