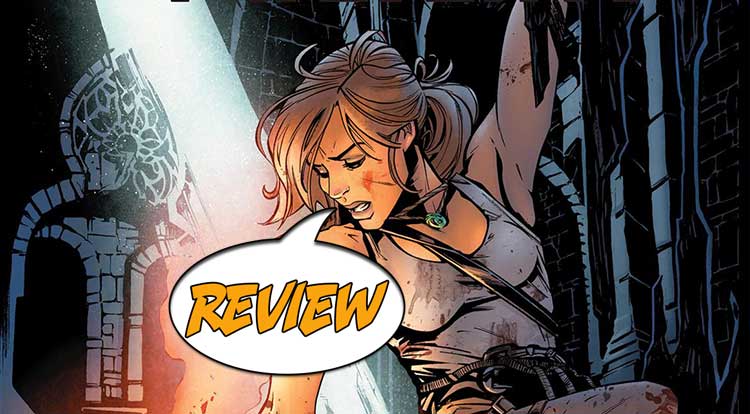 Lara Croft is an archeologist with a penchant for exciting adventures and supernatural artifacts. When a new adventure finds her, will she be up for the task? Find out in your Major Spoilers review of Tomb Raider #1 My experience with Lara Croft and the Tomb Raider series is, admittedly, a bit limited. The only game in 11 installment franchise is the 2013 reboot with my choice of console preventing me from enjoying the newest one. I’ve seen the movies as well, but I think most fans of the series would hold that against me. Regardless of my shortcomings, this issue is billed by the publisher as a good entry point for newcomers, and I might as well be one. The book starts with Lara Croft running, from someone with a gun, through a cave before cutting to one week earlier where our hero was at a much less stressful conference. After a day of lectures, Lara and her friend Joslin meet with a combat trainer that is going blind, a fact that book won’t let you forget. Returning to her Hotel, Lara finds a man waiting for her on behalf of a Professor Demur who wants her help locating the Mushroom of Immortality. Lara turns him down, only to later find him dead as the hotel evacuates from a fire alarm. Lara meets with Professor Demur and agrees to look at his research about this Mushroom of Immortality, but upon entering his office they are confronted by a group of grey thugs.

The Tomb Raider franchise is not new to comics, and even this newer continuity has had some time in the medium with the likes of Gail Simone at the wheel. It is too early to say where this newest installment, written by the award winning Mariko Tamaki, will fall in relation, but the setup for it is competent. A lot happens in these 23 pages, but the pacing doesn’t feel rushed. Everything seemingly important for the plotline is introduced in this first issue, including the MacGuffin that will have Lara flying to some remote location by next issue. There is also a whole thing about hearing set up, with the blind combat trainer and focuses on sounds and some of the first words being “What do you hear?”, that I imagine will culminate in to a climax where Lara has to navigate, or fight, her way through a pitch black room using only her ears as a guide. Unfortunately, almost all of the dialogue is in service to getting the plot going. This is fine, but it leaves very little room for characterization, and it feels like almost no one had a distinct voice yet. They also fail to name one of the characters who appears integral to Lara at this point. In an action book like this, it isn’t surprising for characters to come second, but that doesn’t mean we shouldn’t hope for more.

NO TOMBS IN SIGHT

Before the reboot, Lara Croft was a heavily sexualized character that was known more for the size of her chest than the quality of the franchise she lived in. With the reboot, they did a lot to make her a still attractive, but normally proportioned woman who does not spend her time in provocative outfits. Phillip Sevy continues in that new line of thinking, even in moments where it would be easy for over-sexualization to happen. He has a fairly good sense of bodies and their natural movements, which means we get some very real poses and gestures; such as Lara brushing her hair behind or ear, or a character talking with his hands while trying to walk through a concept. There are several shots of crowds in this book that feel full, if not a little overfull at times. The big grey men are well designed, and quite imposing, if not a little generic. There’s very little variety in the faces when it comes to emotions though, and it can be hard to tell how a character feels based on their expression. While the bodies are well posed, the hand to hand fighting action was a little confusing with little flow that could’ve been a bit tighter and easier to follow. We primarily get urban settings in this issue, and I am really curious to see how Sevy handles the subterranean settings that a book like this will inevitably lead to.

THE BOTTOM LINE: NOT A BAD START

It does not take much to see where the plot of this book is going to go, and that isn’t necessarily a bad thing. The bad part is that it feels a bit by the numbers at this point, with nothing exciting to make it stand out. Given the pedigree of writer, I hope that there’s more coming to pull us deeper in to these characters, and I hope Phillip Sevy can provide us with strong action along the way. Lara still feels like the strong character she’s been for all this time. So far, it seems we’re getting a good entry in to the Tomb Raider series, but it may not be the first thing I think of when I think Lara Croft. As the solicitation said, this does feel like a good starting point for new readers, even if you haven’t played any of the games, which is always a good thing.

The book is a fine starting point, but there is still an uphill climb to make it great.