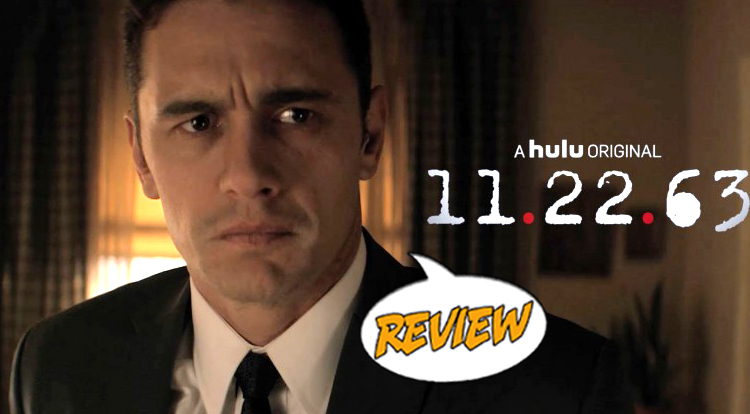 Time-travel always makes for an interesting story, especially for those of us around the Major Spoilers campfire.  But sometimes, Your Major Spoilers review of 11.22.53 Episode #1 awaits! Previously in 11.22.63: 11/22/63 is a novel by Stephen King about a time traveler who attempts to prevent the assassination of President John F. Kennedy, which occurred on November 22, 1963 (the novel’s titular date).  The novel was published on November 8, 2011 and quickly became a number-one bestseller.  It stayed on The New York Times Best Seller list for 16 weeks.  11/22/63 won the 2011 Los Angeles Times Book Prize for Best Mystery/Thriller and the 2012 International Thriller Writers Award for Best Novel, and was nominated for the 2012 British Fantasy Award for Best Novel and the 2012 Locus Award for Best Science Fiction Novel, and now it has been adapted into an eight-episode series for the Hulu streaming service…

Any story lives and dies on the strength of the material.  This story is one of those “lightbulb over the head” moments that anyone could have had, but only a truly skilled writer would be able to capitalize on:  What if walking into an unassuming closet transported you through time?  The first third of this episode is devoted to the explanation of that mechanism, with a grizzled Chris Cooper as dying diner owner Al Templeton showing James Franco’s Jake Epping the secret that his diner holds.  It’s particularly effective, thanks to the acting involvd, but also the care taken in the scripting, proving that Cooper has thought this out.  The whole thing is very well done, so that by the time Franco actually undertakes his foray into the past, the hard part (accepting that science fiction/metaphysical element) is already taken care of.  Once Franco makes his way back to 1960, he is pretty much a one-man show, interacting with a world that he doesn’t really understand and finding that altering the set course of history is much more difficult than ‘Doctor Who’ would make it seem.

“THE PAST DOESN’T WANT TO BE CHANGED…”

Even with the lengthy running time, this episode doesn’t drag, keeping the plot moving, as Franco heads off to Dallas to try to prevent the assassination of John F. Kennedy, an event that is still 3 years on from his starting point.  There’s a palpable tension in the second half of the episode, with flashback narration from Cooper and a series of misfortunes that remind me of the ‘Final Destination’ movies (in a good way, I promise you), leading to some utterly chilling and very-Stephen-King moments.  (Watch for the scene with the phone booth.  Then, pick up your jaw.)  This episode ends with a well-foreshadowed cliffhanger that has nothing to do with the JFK plotline, making me wonder how much this series is going to deviate from the established story of the book.  From a directing perspective, the whole episode is very well-done, especially the extended 1960s sequence, and the performances are surprisingly sublet, especially James Franco’s work…

THE BOTTOM LINE: WELL-CRAFTED AND PACED

All in all, it’s a great foundation to build the series on, making some surprising decisions along the way (the past REALLY isn’t happy with James Franco) and putting together an entertaining 80 minutes that moves briskly enough that it doesn’t feel like an hour and a half.  11.22.63 Episode #1 has me hooked for the rest of the show, earning a very impressive 4 out of 5 stars overall.  It’s impressive how much star-power and craft went into this one, and I recommend it for fans of suspense/science fiction type stories.

A solid first episode: Feature-length, visually interesting and very well put-together. The visual spell of being in the long-ago year 1960 is remarkably effective...