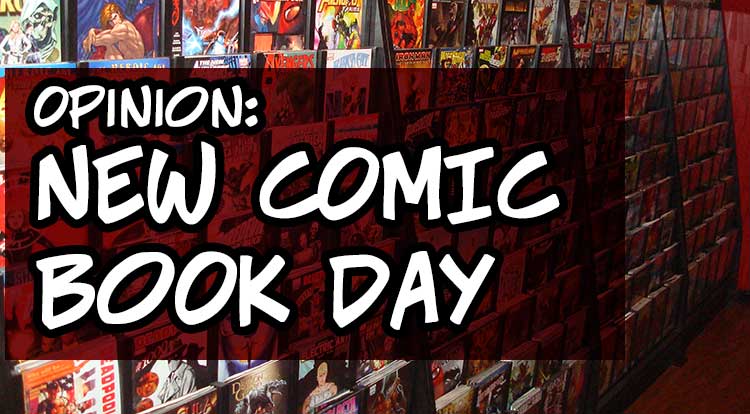 It used to be that Monday holidays such as this one, Presidents’ Day, would give me fits! It had to do with the fact that New Comic Book Day is usually Wednesday, and a holiday like today would screw up the delivery schedule like crazy!

Thankfully, that’s not the case these days!

COMICS AS A HABIT See, buying comic books is considered a “habitual” pastime. What that means is the industry keeps afloat by attracting fans who make a habit of going to their local comics shops on a regular basis to buy new stuff when it comes out.

It doesn’t matter if it’s once a quarter, once a month, or, best of all, once a week. That steady income keeps local shop owners able to pay their bills, including the cost of buying new comics each week! And that gets back to the companies producing comics as well!

The trick is, when books don’t arrive on time, fans can fall out of habit when it comes to getting new comics.

I like to tell the story of Frank Miller’s The Dark Knight Returns. The first issue came out, then the second one a month later. However, the third one arrived six months after that, with the fourth and final one an entire year later! At times, I wondered if I’d ever see that conclusion!

This is why I think it’s important not to schedule a miniseries in particular until the company has all, of close to that, of the books in hand before putting them on the schedule. A good example of this was Power Cubed from Aaron Lopresti and Dark Horse. The creator had the comics pretty much finished before the first one hit the stores and the Previews. Good job!

You’ve got to keep the fans on a steady diet of new material. If your book is going to be late, be sure to let everyone know through social media and the publishing company. Most fans are pretty forgiving if you give them plenty of notice.

Here at MajorSpoilers.com, we refer to Wednesday as “New Comic Book Day.” That’s because the stores have already received their shipments and will have new issues on the stands on that day of the week when you get there.

As I mentioned earlier, this wasn’t always a sure thing until recently.

There were times when comics weren’t even released on Wednesday. I can remember when they were out on Fridays instead. The reasoning was that fans could leave work or complete whatever they were taking care of that day, then go to the comics shop on the way home to get their books. After that, they’d have the entire weekend to read what came in, making them ready to discuss them with friends when they were done.

However, that didn’t always work out. Let’s say you were busy on Friday after work, perhaps going to see a comic book-related movie like Deadpool with friends. Most stores have tended to close at 6 p.m. on Fridays, sometimes later (one store would stay open until 9 p.m., which I always appreciated). If you went to dinner then to the movie, you wouldn’t have time to pick up your stuff before the store closed.

That meant you’d have to go by on Saturday or even Sunday. This would greatly reduce the time you had to read new product, and it would often mean that being ready to talk about the latest developments in your favorite books wouldn’t happen on a regular basis.

Also, many store owners want to have something of a life (many of them tell me that, at least)! They like to go out with family and friends on Friday night, too! Having to keep the store open later meant a curtailed, if not eliminated, evening of entertainment.

Whatever the reason, they approached the distributors, who let the companies know that Friday wasn’t working out as well as they had hoped.

Wednesday is an interesting choice because it falls on “hump day,” which gives fans something to look forward to in the work week. Many stores will bend over backwards to make sure their customers can get the books they want on that day. Oh, and it makes the store’s cash registers make sweet music, which owners also like to hear!

It’s turned out to be a pretty good day to put new product out because if you can’t get there on Wednesday, you can still make it on Thursday or Friday, thus having your books before the weekend hits!

The bad news was that whenever a weekday was a holiday, the distributor would take that day off since it was a national holiday (Presidents’ Day, for example). That caused the shipments to local shops to be delayed a day (sometimes, longer), moving New Comic Book Day from Wednesday to Thursday that week.

However, habitual fans would still show up on Wednesday, money in hand, ready to buy new comics. Several stores would have trade paperback sales on the Wednesday after a Monday holiday in order to try and capture some of that lost income.

It still didn’t turn out well, bringing in only a fraction of what a New Comic Book Day would rake in.

Once again, word reached back to the distributor and the comics companies that local store owners were unhappy, not to mention losing serious bucks as a result of this.

It’s been in place at least a couple of years now, but companies began working with distributors to make sure that comics would be sent out early instead of late. For example, around the holiday season, stores would receive new stuff in a big shipment that would make cover the next several Wednesdays.

Of course, there was a lot of monitoring going on to make sure local shops didn’t sell books ahead of their actual release date. You got in BIG trouble if you didn’t follow the rules, I can tell you!

Of course, I recently wrote about New Year’s Day this year, which turned into a “New Marvel Comic Book Day” due to what is claimed to be shipping and delivery problems. (I’m still not sure that Marvel didn’t want to “own” a New Comic Book Day by having only their materials come out on one of these days. But what do I know?)

Still, barring some serious event that would delay them, this Wednesday will still be New Comic Book Day even though today is a national holiday. Do the books get delivered early, like with last Wednesday’s stuff? Or are they ready for pickup on Tuesdays, like most weeks? Honestly, I don’t know, and I don’t care! As long as the comics are there on time each week, I’m a happy guy!

I know I’m not the only one who feels this way! Knowing that Wednesday will be the day I’ll get to read my new material each week makes it easy to plan for, and easier to work with.

What about you? Do you like Wednesday as New Comic Book Day? Would you prefer going back to Friday or having it be another weekday? Please share your thoughts below!