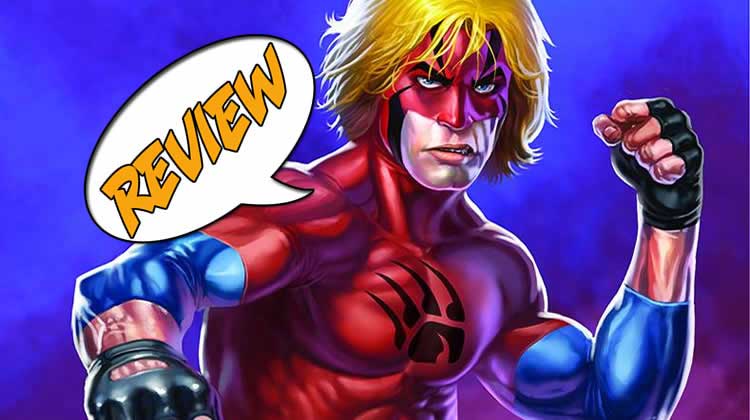 It wasn’t long ago that I reviewed the return of Nexus from Mike Baron and Steve Rude. Well, now another creation of Mr. Baron’s is back, and he hasn’t missed a beat even though it’s been a long time since I’ve read Badger!

Previously in BADGER: Fans have demanded it, and now, at long last, the Badger returns! A brand new story ripped from today’s headlines, from the inimitable Mike Baron! Badger as you’ve never seen him:  Raw! Furious! Crazier than Randy Quaid! Jim Fern’s art will astonish! With a killer variant cover by Paul Pope!

YOU DON’T HAVE TO BE CRAZY …

Ever since superheroes appeared on the comics scene, there’s been this question as to whether you’ve got to be crazy in order to put yourself and those around you in danger. Sure, it involves daring escapades and making things right, but you have a terrible laser ray that can cut you in half aimed at you, and I know if it were me, I’d think twice!

Well, Mike Baron, who likes to explore the limits of the superhero genre, developed Norbert Sykes, a hero who truly is certifiably crazy! He hears voices, he takes terrible risks and he’s still someone you want in your corner if you’re in trouble!

Here’s a little background on the series – Badger first appeared back in 1983, around the time Nexus was being produced. The book came out from Capital Comics, then moved to First Comics in 1985. It’s been provided by other companies along the way, including Dark Horse, Image and IDW Publishing.

Like Nexus, Badger has a devoted following, and (since I’m included in that group) we like to support Mr. Sykes whenever he returns to the comics pages.

If you haven’t read the various Badger comics to date, not to worry! Badger #1 features something fans haven’t really seen before – the beginning of an in-depth origin story.

Things begin with Norbert signing up for the Army. As well as his physical conditioning, the Army likes that he has worked with dogs in the past, so they take him on. Like several people I’ve met before, we discover that Norbert likes animals more than he does people, and he forms a strong bond with a German Shepherd he names Otis. They sleep together, eat together and go on patrol together, among other things. When something happens to Otis, Norbert doesn’t take it very well.

Eventually, he encounters his animal spirit, a badger named Myrtle. She convinces him to fight for the animals, which he takes on as a crusade, basically.

It doesn’t take too long before Norbert is institutionalized, and he meets Daisy Fields, who learns that Norbert isn’t alone in his own head. She finds at least five other personalities there, and begins therapy on him.

One of the best part about Badger is the wonderful dialogue that Mr. Baron puts into the mouths of Norbert and many of those around him. A good example happens on the first page when a doctor asks him to cough. Instead, Norbert barks loudly. Yeah, I found that funny!

As always, the pacing is quick and the characterization vibrant. As we follow Norbert through the various stages of insanity, we feel for him. Admittedly, I don’t have much experience when it comes to insanity, but Badger always made me feel more sympathy for those dealing with this concern.

Jim Fern provides the art for this debut issue, and it’s very understandable and engrossing. The action, the conversations, the explosions – yes, there are explosions – are all conveyed with equal ability, and I found it easy to dive into the world of the Badger.

The sequence where Otis meets his final fate was particularly gripping. Otis has learned to be a hero much of the time, but that can’t always go well. And this time, it doesn’t. Norbert is captured by the enemy, and the first time we see his face following that experience, we see a look there that I wouldn’t take lightly if I were to encounter it. Yikes!

THE BOTTOM LINE: A Different Kind of Hero

Norbert follows his own path, defending those he feels need defending and taking on the foes other heroes might cringe at.

To get copies of this comic, you should contact your local shop and let them know you’re interested in it. It’s unique, but I’ve often found that true of anything Mr. Baron creates. That’s why I enjoy them so much – I don’t have any idea where we’re going from page to page!

Again, this is the perfect jumping-on point since it’s an origin story. If you’ve missed Badger like I have or are simply curious, I highly recommend you read this comic, which is unlike any other superhero book you’re read before!

You don't have to be crazy to be Badger, but it sure helps!