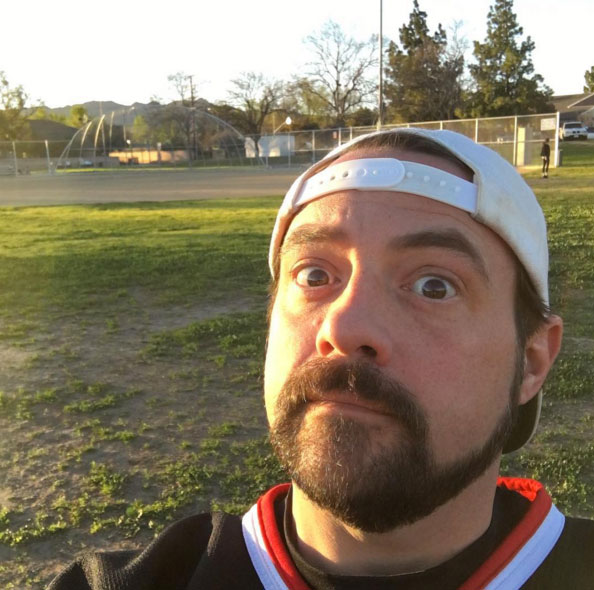 [Television] Kevin Smith and Greg Grunberg are Geeking Out for AMC

Comic Book Men has been a big success for AMC, so much so, that it is giving Kevin Smith another show about comic books and pop culture.

In Geeking Out, Kevin Smith and actor Greg Grunberg, will talk comic books and pop culture, watch clips from related media properties, and conduct interviews with celebrities. Honestly, from the press release it sounds a lot like DC’s All Access and Marvel’s Your Universe, but with more freedom to expand into other areas.

The eight-episode series will debut at the San Diego Comic Con in July, with the series kicking off later that summer.

While I have a ton of respect for Kevin Smith, there are already a ton of online shows doing this exact same thing that AMC could tap into. But I guess with Kevin Smith’s geek cred card at an all time high, it makes sense to go with someone everyone recognizes rather than an Internet celeb who only has several million subscribers to their channel.

The show is expected to premiere with a special episode covering Comic-Con International: San Diego in late July, with eight more episodes to run weekly starting in late summer.

“Kevin and Greg are both true fans of this content, and share a deep passion for talking about it, and engaging other fans about it. But it is their natural chemistry as hosts that really brings this idea together,” said Joel Stillerman, president of original programming and development for AMC and SundanceTV. “As part of our growing non-fiction slate, we wanted to create a broadly entertaining venue for hardcore fans and general viewers where we can break down all things fanboy on a weekly basis; and we wanted to bring those fans great interviews and exclusive looks into the world of fanboy culture. We look forward to sharing this highly entertaining duo with our viewers.”

“AMC has been my TV family for five seasons of ‘Comic Book Men’ now, so I know that ‘Geeking Out’ is in the perfect, fan-friendly network hands,” said Smith. “I can’t wait to lose fluids on the airwaves of my favorite channel over the genre gems we’re gonna get insider access to due to gregarious Greg’s bonafides! And to make it even more of a family affair, ‘Geeking Out’ lets me work with the Weinsteins again – the two guys who started my career 22 years ago! I’m lucky to be working at all, let alone working with friends and family on a dream show where all we do is talk about all the media that makes us moist!”

“I get all my work from my friends. Now it’s time for me to take advantage of those relationships even more,” said Grunberg. “I am going to get every single genre-based writer, director and actor I know to come on our show and geek out with us. And they’re going to thank me for it. I love how Kevin Smith smells and we fit together like two hibernating fan-bears. Thanks to AMC and the Weinsteins, the rest of the world is going to get to see what’s inside our dark, dank geek cave. It’s going to be a fun 30 minutes, if I can just get Kevin to stop talking and smoking.”

AMC’s opportunistic approach to non-fiction has allowed the network to identify and bring to air a unique mix of shows that complement its scripted originals and movies. The network’s growing non-fiction slate includes “Talking Dead,” the #1 talk show on television, “Comic Book Men” and new originals including “The Making of the Mob,” “The American West,” special events like the recent “Lennon 75” concert and the forthcoming “Ride With Norman Reedus.”

What are your reactions to this news?