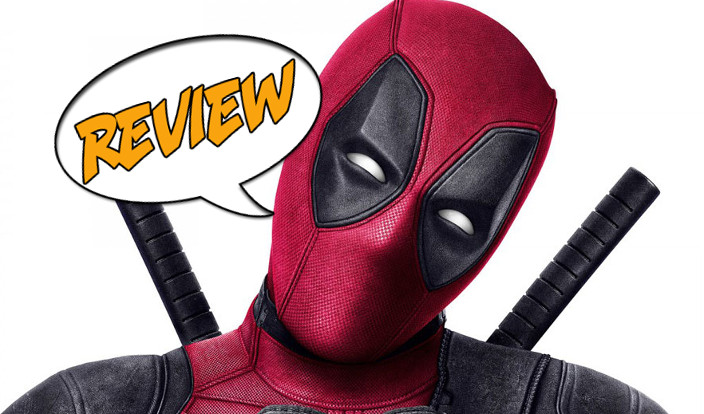 So there’s this character you may have heard of named Deadpool.  Red suit, makes jokes, eats chimichangas.  He was also in Wolverine: Origins.  Well, not really.  That wasn’t the Deadpool that’s in this movie.  This is a completely different Deadpool movie.  But is it a good Deadpool movie?  Cue the music and click for the review! KICKING IT IN THE HEAD

As the opening credit sequence rolled I could tell that the movie was going to nail most of the right Deadpool “notes”.  While slowly panning through a still frame of mid action carnage, we see great credits such as “Directed by: Some Asshat”.  From there things only get better, funnier, more violent and certainly profane.  And it’s a hell of a good time the whole way through.

Story wise, Deadpool doesn’t have much going for it in the way of originality to be brutally honest.  It’s an origin story and revenge picture.  We see how Wade Wilson gets his mutant powers and scarred face.  This is after he has met the love of his life, Vanessa, who he is now scared to go back to because of how she may react to his hideously scrotal like appearance.  Deadpool sets out to find Ajax, the man who is responsible for said appearance in hopes that he can be cured.  What sets Deadpool apart and makes the film work is the characters, writing and the obvious love for the source material that everyone involved has.  Ryan Reynolds should be commended not just for being able to bring the Merc with a Mouth to life so brilliantly, but for fighting as much as he has to get the Deadpool movie that fans have wanted made.  His chemistry with Morena Baccarin is great and the two’s extremely sexual relationship also shows a lot of love.  T.J. Miller is great and this may be one of the best roles I’ve seen him in as he isn’t resorted to “goofy stupid guy”.  Ed Skrein makes for a fairly decent villain, most of the time coming off as quite wicked and Brianna Hildebrand and Stefan Kapicic play splendidly off of Reynolds’ Deadpool as Negasonic Teenage Warhead and Colossus.

BEST, AND ONLY, OF ITS KIND

The movie has what almost everything anyone familiar with the character Deadpool would want/expect.  The fourth wall is demolished, jokes come fast, hard and in your face (and as crude as that statement sounded) and there is some wonderfully choreographed violent action.  Seriously.  This is no soft R rating.  Deadpool more than earns it in every way with vulgarity, explicit sex scenes, female and male nudity, decapitations and brains being blown out.  Other than the Punisher movies, there haven’t been any R rated superhero movies I can think of, and certainly none like this.  There wasn’t a point where I wasn’t enjoying myself, even with some of the small problems that I had (which we’ll get to soon).  About forty-five minutes or so into the film I realized that apart from some flashbacks, the setting hadn’t changed from the bridge scene that we’ve all seen so much of in the trailer.  It’s pretty amazing that the film manages to jump about and distract you so much that you don’t realize that real time (in movie) has barely passed.  Shout out to the writers for managing to keep the story interesting and for director Tim Miller for stretching only two major action scenes out within the movie.  That’s not to say there isn’t action in between but your bulk is in those two set pieces.  As for said action, it’s fast paced and extremely well done, with all kinds of cool ninja flips done by the main man himself.  There were a few instances where the effects looked a bit wonky, and I think a lot of the budget went into creating Colossus and the finale, but nothing hideously distracting.  Be prepared for some great shish kabob work here.  Comic readers will get their fill of Easter eggs, from a Green Lantern reference to Bob, the Hydra agent.  Tons of fun stuff packed inside an hour and forty-seven minutes.

Deadpool does suffer from a few problems besides the story.  It’s a bit predictable at times and some jokes are even easy to see coming.  I don’t personally have a problem with crude humor, but there were points where I thought it got too juvenile.  But, hey, it is a Deadpool movie, right?  While I liked Colossus and Negasonic Teenage Warhead, it was an odd choice to have them in the movie and the constant hounding from Colussus for Deadpool to join the X-Men felt off.  While Ryan Reynolds has Deadpool’s personality nailed, there were moments where he is out of the costume that Deadpool’s crazy seemed to turn off or at least get dialed down.  To me, Deadpool is a character that is constantly insane, so to have him upset and calmly looking for his girlfriend was odd.  The story goes out of its way to point out that Deadpool isn’t a superhero but sets Wade up as this hired gun with a heart in flashback.  If you’re going to give me a different superhero movie, might as well give me the one who doesn’t give a sh@t, I say.  Gina Carano does her action well but plays every Gina Carano role that’s come before, only this time with a match in her mouth.  Lastly, I know it’s probably hard to convey in a movie but I would have loved to see Deadpool argue with the two voices inside his head.  He’s certainly crazy in this flick, but that would have lent him an even greater set of “nuts” (get it?)

I’m not a huge Deadpool fan.  I don’t regularly read his comics and I find him to be a one note character sometimes, but I was looking forward to this movie.  Let me tell you, I was blown away and had a friggin’ fun time at the theater.  There hasn’t been a superhero movie experience like it in a long time because there isn’t a comic book movie like Deadpool.  My manager and I were joking before the film that we were excited for the movie but will be happy afterwards so Deadpool can go away.  *Secret: Deadpool is like herpes, he never completely goes away, just leaves a little then comes back*  After seeing this, I don’t think that I can have less Deadpool, I enjoyed it that much.  So please, don’t go taking kids.  I really hope parents are responsible and leave the kids at home because Fox getting angry letters will only hurt the chances of a Deadpool sequel, or at least an R rated one.  I loved this movie.  It may not be the best comic book movie made, but it is certainly one of my favorites.

Deadpool is unlike any comic book movie before. It's crude, wickedly funny, violent and fun the whole way through. While it isn't the best comic book movie, it has become one of my favorites.