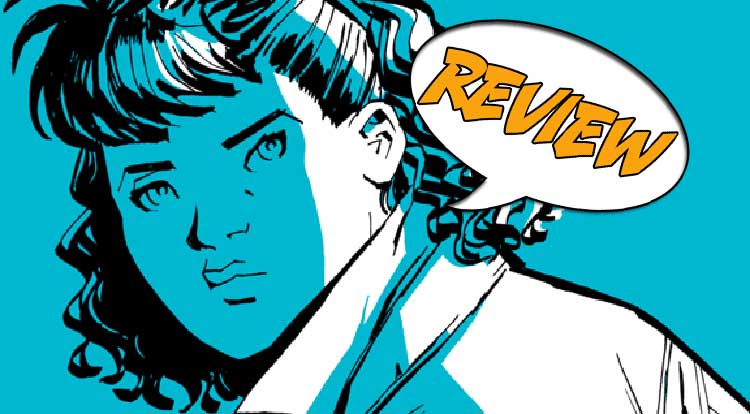 Erin is gone! Did the strange looking and mysterious teenage boys take her to get healed, or are their intentions far more sinister? Find out in your Major Spoilers review of Paper Girls #5! Paper Girls #5
Writer: Brian K. Vaughn
Artist: Cliff Chiang
Colorist: Matt Wilson
Letterer: Jared K. Fletcher
Publisher: Image Comics
Cover Price: $2.99
Previously in Paper Girls: The titular paper delivery girls have found themselves in the middle of something weird, unwilling participants in a conflict that they don’t understand. Two strange allies offered to help them save Erin, the victim of a gunshot wound, but it seemed that they kidnapped her instead.

After Heck and Naldo took Erin in to their strange ship, it was uncertain where they went. Now, we find out they took her somewhere (somewhen?) to get some bugs to patch her up. As they try to return her to the rest of her group, they run in to trouble from the still unknown force that works against them. Meanwhile, the rest of the girls evade capture from the strange team of dinosaur riding adults as they try to find Erin. Once they do, the adults arrive and try to get the girls to give themselves up. During their deliberations, Heck and Naldo’s unstable time ship explodes, throwing Erin and the rest to another point in time.

One thing I will give this book, and Brian K Vaughn, right off the bat is that they have really thought some of the aspects of time travel through that are ignored by other media. For example, if your vessel is stationary and you travel back in time, the planet will have been in a different place and you’ll find yourself stuck out in the vacuum space. I know that time travel is a fiction concept, but such attention paid to details like that show that you have a capable story-teller and world builder. Real thought went in to this book, and it never feels like things are just being made up on the fly.

That said, this issue is almost disappointing in the wake of the previous one. This book is full of mysteries, and we’re given an answer to a small one here, but even more is piled on by the ending. I love strange books and weird mysteries, but if you are counting on those things to carry the story, then there need to be answers or lots of hints to get us to think in the right direction. There are obviously rules to this world, but there seem to be times where they are kept away from us purely to enhance the feeling of confusion when there’s plenty of chances for a line or two of dialogue to fill us in. This isn’t necessarily a bad thing, but the main cast who is supposed to carry the emotional weight of the book has been fairly weak recently, and, at times, uninteresting. It doesn’t help that it has been hard to keep track of which girl is which, and that I can’t remember any of their names despite having just read the previous couple of issues before this one.

The series started off with some pretty strong characterization, with some of the personalities being fleshed out, but by the time we reach the end, it feels as though that has been abandoned in favor of the things going on around them. Even the moments in these later parts of the story that seem like they are meant to give the characters more depth are not followed through on. By this issue, they all start to feel like the same person as each of them has their tough moments or brave moments, but no way of really knowing if these actions are in character for them or not. Spending more time on the characterization even while everything is going on would have helped some of these moments land better. Speaking of landing, I don’t think the cliffhanger hit as strong as they wanted it to. While I couldn’t have called it directly from the beginning, it is something that makes sense in the world, and isn’t really surprising given everything else that has happened.

NOTHING NEW UNDER THE SUN

Cliff Chiang is one of those names like Fiona Staples or Greg Capullo; you know what you’re getting is going to be good, and this book is no exception. Like the writing though, the art here feels a little stagnant. There were some really striking, big moments in issue #4, and fun panel layouts that helped to shake things up, but we’ve already seen everything in this issue in previous ones. Maybe Chiang wasn’t given the room to let loose as he may have been in previous times, but even the most strange and abstract moment where the ship blew up felt like it was lifted directly from the last issue. Some of the designs in this book have been wonderful, and we’ve been getting fresh takes with each and every issue, which makes it feel like we’re getting cheated here. This is not to say that the art in this issue is bad, it is still high quality stuff, and I just want more of it.

THE BOTTOM LINE: DIDN’T QUITE HIT THE MARK

I realize that I may be in the minority when it comes to my feelings on this last chapter, but I really expected more. Books like this, the ones full of WTF moments and bizarre mysteries, live or die by the characters inhabiting the world, and I feel little connection to them. I love coming of age stories, and I have been on board for all the Goonies style adventures thus far, but I really want the second arc of the story to take us deeper. I’m interested in the mysteries, but maybe not enough to keep me from switching to picking up this book in trade format, where I imagine it will actually fare much better. There’s no denying that this is a quality book, with really strong talent behind it, but even the best fall a little short some times.