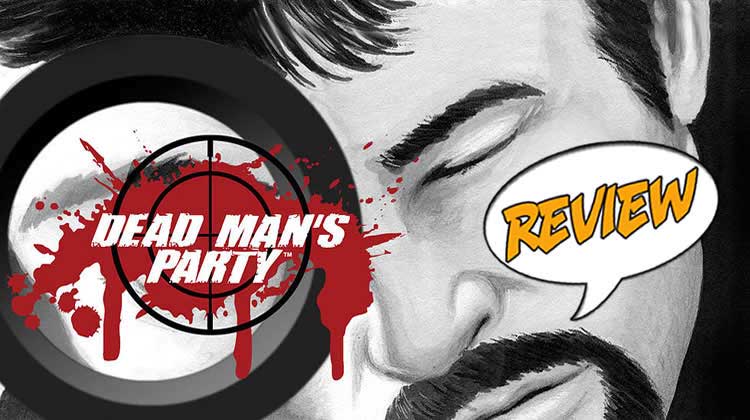 There’s something truly gripping about crime drama and crime families. They all have their own set of rules and standards, and they must be followed or else the person breaking them will pay the price.

I first spoke with the creators of this trade paperback back last Fall during the New York Comic-Con. I immediately found the premise really one I wanted to read about, so I ordered the trade through my local comics shop. It came in this week, and I had to sit down and read it immediately! It was well worth the wait, all 128 pages!

Previously in DEAD MAN’S PARTY: In the assassin trade, it’s called a Dead Man’s Party: Part Viking Funeral, Part Irish Wake. It’s a twisted way for your murderous peers to either honor your memory or settle a score. The Party can’t be cancelled, and each of the five professional killers who are “invited” have 30 days to collect the bounty on your head and add your distinguished name to their resume. For the world’s most feared hitman – known only as Ghost – arranging a Party is a last resort, a way to go out on his own terms. The invitations are sent, the executioners are coming… And that’s when Ghost discovers that he’s made a terrible mistake.

WHAT IF THINGS AREN’T AS THEY SEEM?

It wasn’t that long ago that I fell in love with a book from Europe called The Killer by Jackmon It was translated into English, and it was unlike anything I’d ever read before. Now, don’t get me wrong – I like heroes! But to see an assassin from his own perspective was really new to me. He didn’t look heroic, he didn’t act heroic, and he was looking out for himself instead of righting wrongs. I read all the volumes of that book, and I’d be there in a heartbeat if more were to be released.

That’s what Dead Man’s Party really reminds me of. When the book starts out, the Ghost is as successful as he can be when it comes to eliminating people for hire.

Then he gets really bad news. He may not be around very long to enjoy the spoils of his trade. More than that, I’m not going to say because it would give away important parts of the story. Let me just say that I loved the various twists and turns in this book, regardless of when they took place.

Again, the Ghost is like the Killer in that he’s not really a good guy in the purest sense of the word. But he does have allies and enemies, and how things progress had me on the edge of my seat, wondering if things really were as they seemed or if they might not be.

As we follow the Ghost through this trade, we can’t help but be drawn to how he’s trying to resolve the situation he finds himself in. The pacing is quick and dynamic, and all the characters made me want to turn the pages ever faster! Well done! Oh, and there’s a very cool ending that has me wanting more!

I’ve also seen this book compared to Criminal and Jinx. It is also said to be a great complement to noir cinema and action-thrillers like the Bourne Trilogy and John Wick. Those comparisons are well deserved, in my opinion.

This is the first book by Mr. Marsick that I’ve ever read. Let me tell you that it won’t be the last. One other book I’m aware of so far is Indestructible: Stingray. He’s also written a fascinating column about scripting called “Guerilla Writing,” and as someone who writes reviews, I was intrigued by what he had to say.  I’m going to be after anything with his name on it, you can count on that.

The painted style of Barnett’s art draws the reader deeply into the story as well. I’ve seen it described as “Alex Ross meets Sin City,” with the action sequences gripping and the characters’ emotions well displayed.

The artwork from Barnett really works well with the plot, and that’s not always true of a painted art style, especially a dark and gritty story like this one. The colors are also chosen appropriately, sometimes mostly dark browns when things warrant them and also with subtle tones even during the day. This is, after all, a story where bright colors would be way, way out of place.

THE BOTTOM LINE: Something Different in Crime Drama

I’m going to do some research to find out if a Dead Man’s Party really happens in the world of assassins, but if not, I bet some people in that universe will truly consider it.

This story pulled me in and never let go! I had to get to that last page to find out everything happening, and I’d truly love it if this creative team would again venture into the universe of criminals.

To get this trade, you can check with your local comics shops. When I checked on Amazon, I found it was currently out of stock.

If you want to at least get started on this book, you can go to comixology.com at this link where you’ll find the first two chapters/issues for sale. Hopefully, more will be available there soon! You could also try to check out the Darby Pop Publishing’s website store, but this trade or even the individual issues weren’t there when I checked as of this writing. If you see they have a booth at a comics convention near you, you could go there and see if they have any copies with them.

By the way, this is the same company that printed Side-Kicked, another book that took me where I’d never been before while reading comics. I have to look into more of what this company produces!

Go to the Party!

Dead Man's Party is part Viking funeral and part Irish wake, with criminals seeking the person on the verge of dying!