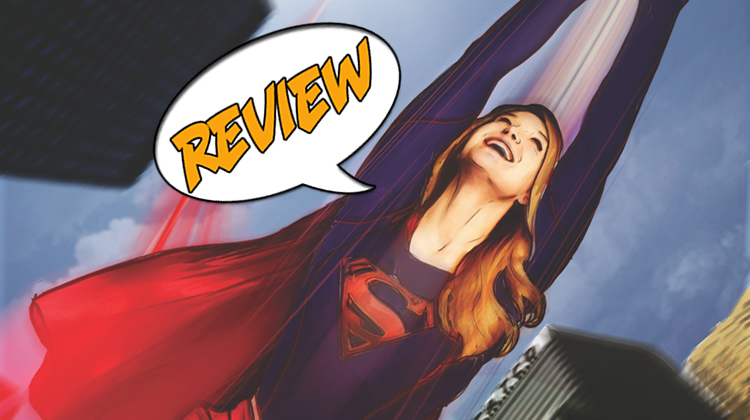 The Adventures of Supergirl #1, Chapter 1 Review

I don’t normally review digital-first comics because they’re really only a portion of what will come out in print eventually. But I’m such a big fan of the CBS Supergirl show that soars on Monday nights as well as scripter Sterling Gates that I wanted to get the word out about The Adventures of Supergirl, which debuted this past Monday on the DC Comics app and comixology.com.

Previously in THE ADVENTURES OF SUPERGIRL: When an escaped prisoner from Fort Rozz interrupts a football game, Supergirl is on the scene to take her down. But Rampage is mad about more important things than a sporting event-and no pesky superhero can stop her quest for revenge!

While Marvel has mastered movies, DC has really excelled with television programs based on their characters. The only show that didn’t get more than one season was Constantine on NBC, and it would still be on if it had been on nearly any other network, in my opinion.

Supergirl has done very well on Mondays on CBS, so it makes sense that DC will tie in with their own comic, digital-first.

Let’s face it – this isn’t anything new for DC! There have been (and continue to be) related comics including ones tied into Arrow and The Flash. Marvel has made some digital-first books, but you can buy and download DC content many days of the week!

What really benefits DC is the fact that some folks download the digital versions (often just 99 cents each), then double-dip by purchasing the paper version, which often arrives not long after. Pretty smart, if you ask me!

TRUE TO THE SHOW

Sterling Gates is a name associated with the Girl of Steel at DC from 2008 to 2011, and it’s great to see him writing her again! He’s been one of Supergirl’s best scripters, and he easily steps into that role again in this initial chapter of the series.

In an interview with Hollywood Reporter, Gates said, “”I am beyond thrilled to be writing Supergirl again. Supergirl is one of my all-time favorite characters — I think she’s one of DC’s best characters, period — and I was extremely honored when DC Comics and the producers of CBS’ hit television show asked me to write Adventures of Supergirl.”

Gates continued, “Greg Berlanti, Ali Adler and Andrew Kreisberg have created a unique and frankly brilliant take on Kara ‘Supergirl’ Danvers, and our comic will be an extension of their fantastic world. Fans of the show can expect to see all their favorite Supergirl characters play a role in our massively action-packed 13-part story exploring the various facets of Supergirl’s life!”

“My editors have assembled a wildly talented group of artists — including Bengal, Jonboy Meyers, Emanuela Lupacchino, Emma Vieceli and the brilliant cover artist, Cat Staggs — and our goal is to knock your super-socks off every two weeks across 2016,” he said.

Gates’ writing is consistent with the show, and I can hear Melissa Benoist’s voice saying Supergirl’s dialogue. Things happen on a fast-paced basis, and I only wish the digital-first version would come out on a different day than Monday, which is when the show appears on CBS at 8 p.m.

I still have problems with the fact that Supergirl has no rogues’ gallery of her own, that she keeps taking on Superman’s baddies. Even in this issue, the Girl of Steel is taking on a Supes’ foe, this time Rampage. At least she’s a woman!

One of the biggest troubles comics translations of TV shows and movies have is getting the likenesses close to the actors on the screen. I did like how Bengal showed Kara’s face, so I’m optimistic he’ll do a great job on the rest of the cast as they appear. We do see Hank Henshaw and Alex, Kara’s sister, from the show, and they look very close to what we see on the small screen. I also like his “super” action sequences as well.

I have to say that I particularly liked Staggs’ painted cover, which looked like a screen capture from a Monday evening. Hope she gets to keep making this happen, especially on the paper versions!

THE BOTTOM LINE: A High-Flying Debut

I hope DC is paying attention! If this book does well, maybe the same team could bring Kara back to the comics shelves. We’ll see.

What’s going to be fun, though, is that Monday will be “Supergirl Day” as far as digital-first comics and the CBS show.

Want to check this initial chapter out? Go to comixology.com at this link or to the DC Comics app and search for “Adventures of Supergirl.” I liked it, and if you enjoy the show, I bet you’ll become a bi-weekly habit with you as well!

The Adventures of Supergirl #1, Chapter 1

If you enjoy the CBS show, you'll also want to read this digital-first comic!