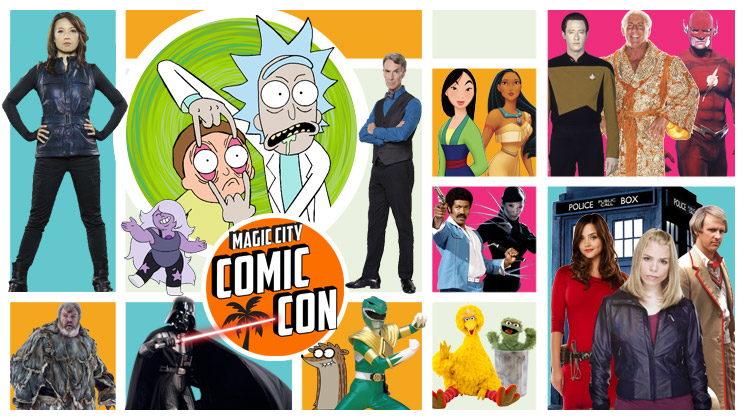 I’m still not used to going to my first comics convention so early in the year! But I’ve already been to Magic City Comic Con, located in the Miami area! For more information, here’s their website!

The con took place in the Miami Airport Convention Center, so it again was in a good location as far as ease of access. It ran from Friday, January 15, through Sunday, January 17, and had a lot of fans in attendance. It’s important to remember that this con is related to the Florida SuperCon that takes place in July. I reviewed their 2015 convention at this link.

Last year I was there only on Saturday, always the biggest day of any convention. This year, as in the past several months, I was there helping at my friend’s booth, which also comics including Think Alike Production’s The Agency, Dark Side Global’s Max Hunter, Escape Comics’ Under the Flesh and, of course, Stabbity Bunny from Richard Rivera.

WHAT IS MAGIC CITY COMIC CON?

As with last year, there were also booths featuring many local artists, and they attracted the attention of many con-goers. Hopefully, they sold a lot of their wares! Also, many dealers had a lot of stuff that people were picking up, paying for and taking home, so they seemed to be having a profitable con.

The top choice of costumers was Kylo Ryn from Star Wars: The Force Awakens. I’d see several of them walking around, so many that when one turned the corner, another would appear from the opposite direction. Wow! Lots of people were in costume, and some were great. There were also a LOT of things to do, and not just during the hours when the dealers’ area was open. That probably explains why there were a huge number of younger fans in attendance – they were being kept busy both day and night! As with last year, parking was terrific. You could often find a place to park in front of the building, which made carrying things in and out easier. That especially mattered on Friday when it rained most of the day.

Again, registration and dealers’ room entrances were very near each other on the first floor. Not far way was an escalator to the second floor, where Artists’ Alley was located. Food was easily accessible on both floors, and it was some of the better con food I’ve ever tasted.

This weekend, I saw more people actually reading and using their printed programs as they walked around the convention. I looked at it, and it seemed to remove a lot of the text volumes that makes other con’s programs tough to get through. Clean and simple, so it was used a lot!

There were larger-than-life Simpsons characters walking through the floor occasionally, which added a visual element to the convention.

There were a lot of hotels very nearby. We were too late to get a room in the Double Tree hotel in the same building as the convention, so we ended up in the Cambria Suites less than a mile away. We loved the place! They had shuttle service that would take you ANYWHERE you wanted to go, then would wait until you were done to return you to the hotel! Amazing! We also liked the room, which had a small TV area one could use if someone wanted to go to bed and the other wasn’t tired yet. And the price was tremendously reasonable! We’ll be back there again for sure!

Both Friday and Sunday were well attended, but the best day for attendees was Saturday, of course. It was tough to navigate through the place at times! I’m sure the organizers were thrilled! I’ve mentioned many of the positives to 2016’s Magic City Comic Con, so it’s time to talk about some things I feel could go more smoothly next year.

I’m sure the event organizers were thrilled to see so many people in the aisles on Saturday, but they were often difficult to get through as a result. Like last year, just a few more inches in each one would have been the difference between.

The biggest concern had to do with the second-floor Artists Alley. Like last year, it had almost none of the “name” comics creators. Instead, they were once again all in the first floor dealer’s area. I had a comics-creator friend who ended up there, and he was really concerned about the lack of foot traffic. He said that many times, 15 minutes would go by without anyone passing his booth. That’s DEATH to someone trying to get the word out about his or her product. I don’t know what they need to do, but they simply MUST get the word out about that second floor if they expect artists to return.

When we arrived in the morning to prepare our booth for the day, it was really cold! I know that once the crowds enter, they’ll warm the air, but I was sure there were icicles hanging from my nose! Gross!

Two last things that don’t matter much to the general public, I’m sure. As with many southern conventions, they didn’t think MajorSpoilers.com was a big enough entity to grant a press pass to me for. I’ll keep at them about this! Also, the booth my friend ordered that was called a “premium corner booth” and cost a lot more than an average booth only came with two passes. That meant some in our group had to buy passes, something I’m sure the con folks were thrilled to have happen. We’re going to examine the set up of the booth we get next year a LOT more closely.

Also, Marvel’s Agents of S.H.I.E.L.D. Ming Na had to cancel on Saturday. It happens!

Still, it was a great experience. I often say that I used to go to the cons to spend hundreds of dollars, but now I go to make connections for interviews to appear on my podcast. Just like in 2015, I think that if you attended, you had a good time no matter what you were looking for!

I haven’t found any scheduled date for 2017 yet, but I’m more than sure it will be back, so keep an eye on their website! It was great fun and well worth the money to attend and enjoy!