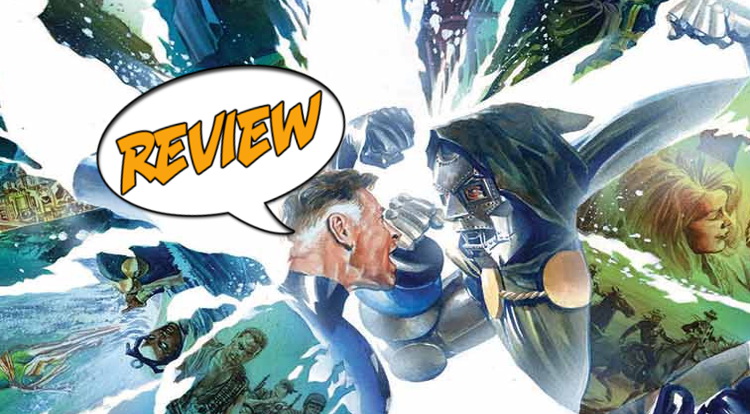 The long-awaited conclusion to Secret Wars is finally here!  Let’s not waste anymore time and get straight to the review!

THIS REVIEW WILL CONTAIN MAJOR SPOILERS!!

Previously in Secret Wars:  The remaining survivors of the final incursion made their attack on Castle Doom.  Black Panther and Namor lead an army of undead while Reed Richards and The Maker (Reed Richards of the Ultimate Universe) sneak in to find Owen Reece, the source of God Doom’s power.

So Secret Wars finally reached my hands and I’ve had a chance to read, consume and ponder it multiple times. So what do I think?  I basically loved it, and probably for reasons many will dislike it.  I think Hickman did a fantastic job of telling a story with a an actual conclusion, something Marvel’s events haven’t had in a very long while.

Things start off heated as Black Panther armed with the Infinity Gauntlet fights Doom “…as Gods…on the Earth.  In the sky.  And the heavens above.”  It’s lines like these that Hickman writes for Doom that just nail the character down flat and gives the issue that moment where you say “Wow!  That’s awesome.”  Reed Richards and The Maker confront Owen Reece.  There is of course a brief betrayal by The Maker as he attempts to kill, or somehow devolve(?) Reed before Owen slices him up.  It was a moment I could see coming a mile away and it was disappointing considering how many unique ideas Hickman has actually had within this event.  And considering how intelligent Reed is, he isn’t going to realize his evil brat self would try that?  Regardless, Doom learns that the fight with Panther is just stalling and he quickly travels to the Owen’s “lair”.  By now, Doom has lost the respect of everyone and he is losing control.  The “RICHARDDSSS!” he lets out while entering  is another brilliant highlight just before the big climax.  What I loved about the fight between Doom and Reed is how personal and close it is.  Owen takes Doom’s power away so the two are on a level playing field and Reed coils around Victor like a python.  It’s a great visual metaphor for the struggle and connection the characters have and the dialogue is top-notch.  Doom’s jealousy once again gets the better of him as he admits Reed would have done a better job at being God, to which Owen replies “Okay then.  If you both agree.”  Battleworld is split and broken.  We then skip eight months later (or current Marvel time.  Thanks delays), on the remains of Battleworld, where Valeria and Sue explain to the reader what occurred in some rather clunky exposition.  Reed has reshaped “Earth-Prime”  His son Franklin shapes the multiple universes (he’s a universal shaper), then Reed uses his God powers to spin them off into their own reality each their own Molecule Man.  This restores Molecule Man back to normal, and I’m assuming makes him less hungry.  What’s really interesting is that these universes need to be cataloged and recorded, something the FF family needs to do (minus Johnny and Ben), so they will become the “Lewis and Clark’s of all existence”.  The last shot is Doom at his castle removing his mask, with his face fully restored underneath and Reed’s words to Susan, “Everything lives.”

Whew!  You get all that?  Good.  What I find interesting is the way Marvel/Hickman chose to get rid of the Fantastic Four, and more peculiar why Johnny and Ben didn’t  get picked to go along for the ride.  I think it’s a brilliant move on their part rather than killing them off.  It makes it much easier to bring them back if needed and it doesn’t feel cheap or disrespectful.  On the other hand, does someone who created universes really need to discover what is in them?  It doesn’t seem to make much sense.  The other thing that really sealed it for me on this event that might upset some is this:  Nothing changes!  First reaction is, why did I just read that whole story only for everything to go back to the way it was before?  But if we take a look at past events, what has been the ultimate end game?  The Marvel Universe is shaken up for about six months until a new status quo in the next event or everything goes back to normal anyway.  None of the previous events even had endings, instead just leading into the next big change, so I applaud Hickman for writing a story with a beginning, middle and end.  We’ve already seen that nothing in the Marvel Universe has changed.  Maybe some minor ones but none that would have been impacted by this story.  Marvel hyped the all-new all-different but Hickman, much like Reed Richards himself, did the right thing rather than the easy one.  He told a complete tale that a reader can read from beginning to end and be satisfied.

UP CLOSE AND PERSONAL

It’s all about faces this issue for Esad Ribic.  While he gets to draw some killer action between Doom and Black Panther, like fighting in the sun or with giant robots, so much of this issue is personal between characters that there are lots of close-ups on faces.  It lets one see the incredible amount of detail the artist puts in his work and it’s quite spectacular.  There is a single page, broken up into 150 equal sized panels.  Each panel alternates between a piece from a drawing of Reed Richards’s face and the other Victor’s.  It’s both a mindf@!k and amazing to look at.  The more time spent looking at that page, the more you can pick out and realize just how much effort this man put into this issue.  I again loved the look of Reed wrapping around Doom during their fight as it was something I’d never really seen before.  The coloring seemed brighter as well but that may have been due to the bright locations.  Unfortunately, with all the faces comes some of the problems with RIbic’s work as well.  I’ve yet to see him draw Sue Storm expressively where I didn’t think she was just hit hard over the head.  Reed’s facial expressions range from “grumpy old man” to “Wilson playing with a Megatronus toy.” (that’s a Shock ‘N Awe Toy Review reference.  Check out those reviews to understand that joke! Plug, plug)  Still, hands down this is one of the best looking books Marvel has put out recently and one of their best looking event books as well.

BOTTOM LINE: FIRST MARVEL EVENT CONCLUSION I’VE BEEN HAPPY WITH IN A WHILE

Secret Wars hasn’t been a brilliant event and I certainly had my problems with it in the beginning.  Marvel’s scheduling once again didn’t help but this really picked up in the end.  The art was strong throughout the whole series and was one of Marvel’s best looking to date.  This issue is a fantastic conclusion to the event that not only has an ending, but a wonderful one at that.  I’m interested to see how this reads in one sitting and more than excited to hear others reactions to the ending.  I love that everything returned to normal.  This way Marvel doesn’t have to worry about fixing anything later down the road.  One could argue that this was just a way to get the FF out of the Marvel Universe but there’s more here than that.  Reed did what Victor couldn’t, and let everything live without trying to fix all the wrongs.  Hickman did what many other writers couldn’t: let the story end.

Secret Wars #9 is a wonderful conclusion to the event, that has a respectful send off for Reed Richards. Artwork is fantastic and extremely detailed. The best part about the story is that it has a conclusion, and changes nothing about the Marvel universe, leaving nothing to repair later.