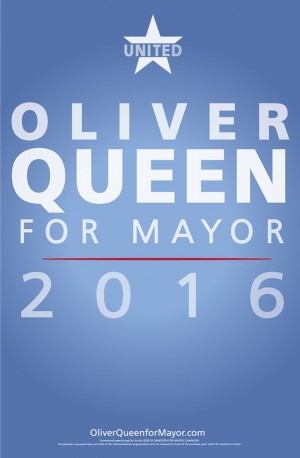 Just in time for the American presidential election to kick into high gear, Arrow Executive Producer Marc Guggenheim has unveiled the official Oliver Queen for Mayor poster that will accompany the CW series 2016 mid-season premier. The mayoral race is a storyline that fans of the classic Van Dyke-bearded Oliver Queen have been looking forward to since Arrow started. While Oliver’s staffers don’t have OliverQueenforMayor.com up and running just yet and we hope it is up and running complete with graphics and slogans soon!

Arrow returns to the CW on Tuesday, January 28th at 8/7c.