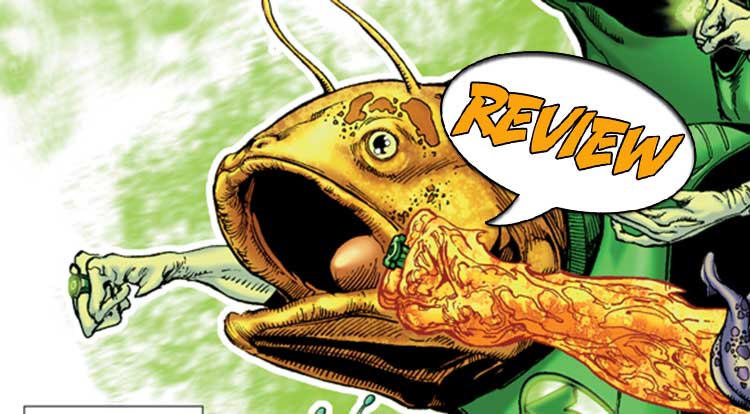 Previously in Green Lantern: Following the events of Green Lantern: The Lost Army, Mogo and most of the Green Lantern Corps find themselves in a different universe that is nearly dead. As the light dwindles around them, the Corps need to come up with a plan… fast.

The problem with a large group of heroes who are in charge of their own sector of space is when they all come together to solve a problem, none can agree on what to do. In this issue, the Green Lantern Corps debates ways to get home, and how they can find the other Green Lanterns scattered throughout the dying universe.  Graf Toren makes the decision that Mogo, the living planet, will crank up its power to shine as brightly as it can to serve as a signal in the darkness.

It’s a plan that works, as the lost Lanterns are able to adjust course and head to the Green Lantern home planet. Unfortunately, the signal works too well as another planet suddenly appears and the team is confronted by a pair of 30-foot high warriors. Fortunately, Dismas and Ausras are the last guardians of a planet that is one giant city, and that city – the Last City = is filled with beings from across the dying universe. Everyone is looking for a way out, and though the Green Lanterns are cautious of the new arrivals, everyone agrees to work together to find a way home.

It’s an interesting first chapter from writer Tom Taylor, as not only do readers get a glimmer of hope that their favorite GLs will return to the main DC Universe, there is also something sinister lurking on the surface of the Last City.  While most of the citizens of this planet are happy for additional help, cloaked figures plot to take down everyone, and by the end of the issue, someone dies!

Ethan Van Sciver has always impressed me with his ability to bring creepiness to his work. Granted, a lot of it has to do with the way the art is colored and shaded, but one look at the giant heroes of the Last City, and it is enough to put me on edge. While we’ve seen scary looking characters before, Dismas and Ausras’s chins are completely black, so when you look at them from the front, it looks like their lower jaws are completely missing. If you are trying to keep a populace under control, this kind of fear would be one way to do it. The other would be the scary transformation Dismas goes through when attacking; at first he looks like a rogue member of the Yellow Lanterns. Things really get dark, when a member of the Green Lantern Corps is taken down in the final pages, and the struggle as the life is drained from the Corps member is disturbing. Van Sciver’s art only makes the sequence that much more frightening.

While the Green Lantern Corps is not something I would normally gravitate toward, the mystery of who killed a Green Lantern has me intrigued. I hope the focus of the six issue mini-series is the whodunit investigation with the search for a way out as the B-story. There is a lot Mr. Taylor needs to get through in order to have a satisfactory ending, and Mr. Sciver will no doubt keep the art tight going forward, so I have hope that this series will be good reading.  There’s good reason to pick up Green Lantern Corps: Edge of Oblivion #1 this week – plus, there’s a cursing squirrel.

This is a great first chapter that will hopefully see the Green Lanterns return to the main DCU.