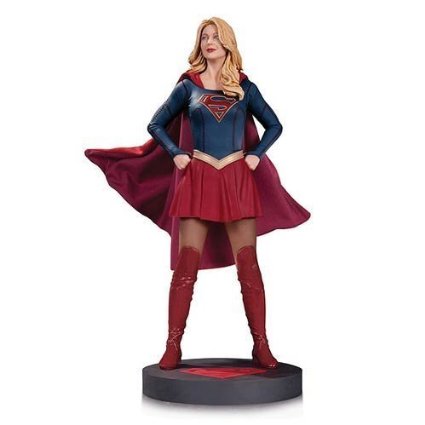 DC Collectibles has released a Supergirl statue based on the likeness of Melissa Benoist from CBS’ Supergirl. In the new CBS series from Warner Bros. Television, Supergirl, born Kara Zor-El on the doomed planet Krypton, arrived on Earth many years after being lost in the Phantom Zone. Raised by her adopted family, the Danvers, Kara grew up in the shadow of her foster sister, Alex, and learned to hide the phenomenal powers she shares with her famous cousin, Superman. Years later, living in National City and working as an assistant at Catco Worldwide Media, Kara decides to embrace her superhuman abilities and become the hero she was always destined to be. With the help of Daily Planet photographer James Olsen, her bioengineer sister Alex, and the research of the super-secret, off-the-grid Department of Extra-Normal Operations (DEO), Kara takes to the skies to protect her world.”

The statue awesome has retained a lot of the texture and heightened design work from the suit seen from week to week on Supergirl. It is certain to fly onto the shelves of Kara Zor-El fans worldwide!

We definitely want this Supergirl statue to join our collection! Are you going to be picking this piece up? Let us know all your thoughts on DC‘s latest television statue offering in the comments!