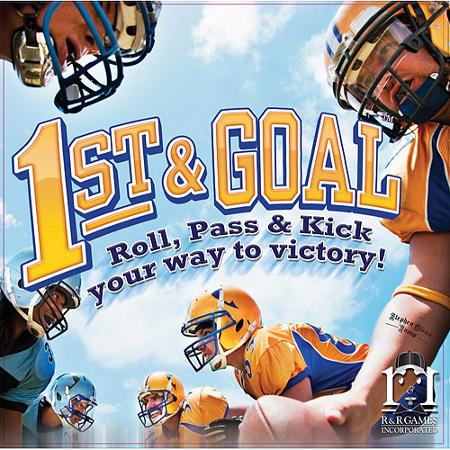 With the new year celebrations just passing, it signals the final month of the football season. Are you ready for the fun of football to be put on hiatus for several months after the Big Game? You could play the latest Madden or NCAA football video game, but that requires a fairly hefty upfront monetary commitment. I am talking about a fairly small game that has all the play calling capability of your average video game and customizable teams.

1st & Goal by R&R games is a fantastic implementation of an American style football game played with dice and cards. Two players face off for the coin flip (which is included) and after the first kick each player takes either the Offense deck or Defense deck as applies. Hands of play cards are drawn and each player strategically plans the attack or defense according to what plays area available. Unlike a video game where you have an entire playbook but are limited by time in selection, the analog version is to limit the choices available since it would be unwieldy to put a play clock in a dice game. After each player makes a selection the cards are revealed and compared. The unique mechanic on the cards is that each play shows all the potential choice of the opponents deck and the result. For example a short pass will show all the defenses and how they affect the resulting dice rolls. Likewise on the defense cards you can see all the offensive options. The results are shown on each cards by finding the corresponding play selected by the opponent. A Short Pass card would List a Prevent defense and show which dice are to be used for figuring out the result of the play. Usually a “Play” die, a defense die, and a number of offensive yardage dice are rolled and the resulting yardage applied to the marker of the field board.

The “Play” die has the potential to break up a play resulting in no yards or even to show a breakaway where a player can keep rolling yardage dice trying to make a big yardage play. Beware of the Penalty result as in can affect the Offense as well as the Defense. Even turnovers can happen when you least expect.

When players need to switch from Offense to Defense, they simply put the cards in hand on the deck and trade decks with the other player and continue until the decks are depleted which signals halftime. Decks are shuffled up and the second half continues as the first.

Special teams can play a significant role in this game. Every little secret play or strange options can be used in this game. Taking a knee, squib kick, Hail Mary pass, and faking a punt are all things that can happen in 1st & Goal. If you can think of something they do in a real game you can probably do it here.

Aside from a few rules specific to certain cards and some of the ways to handle obscure plays, this game is pretty easy to learn. Game length is subject to how intense players get with play selection and how much math may need to be done with dice. Most games are about 2 hours but I tend to only play one half as time can be short for me. The components for this game are pretty good. The cards have a different feel but shuffle well enough and the field is magnetized so the ball marker and “chains” stay in place even with a stiff jostle of the board. The score and timeout markers are simply clear discs that may not stay in place very well so you will have to watch for that. There are several expansions which add new teams, each bringing new cards and dice specific to their strategy. Some teams boast a strong defense while others may be great passers. One option is to play with two players on each team giving one player the offense and the other defense.

So maybe you want to have your own playoff series and before the Big Game you can have your own season finale. Remember, any season can be football season.