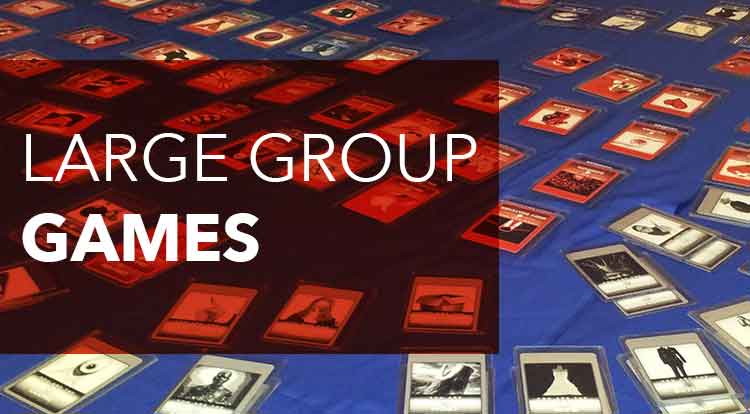 When you have a big group of people what kind of activity do you plan? Board games are a standard go to during holidays when friends and family get together. But, when the number of people grows to above four or five and you don’t want to split up the group? There are a growing number of games coming around that can handle almost absurd player counts. Large group games cover all kinds of genre and play styles. Looking for something with lots of deduction and information gathering or maybe something team based?

A group that has 5 or 6 players usually does not want to split up. Finding a game for this number is not super hard but if you add a couple wanderers you will definitely have to to some searching.

The Resistance is a fun social deduction game that handles 5 to 10 players on opposing teams of spies and resistance fighters. In five rounds or less the spies try their best to get recruited to secret missions and cause failure while the Resistance tries to identify the spies to make secret missions more likely be successful. Lots of lying will occur in these games which can lead to hilarious situations.

Citadels is a small card game with action drafting where up to 8 players select from the available actions and try to build a successful city of districts. The actions are roles which a player selects to gain a special ability or extra actions. Roles are revealed and resolved in numerical order. Some actions are assasination or theft while some are protection and extra money. You need a sharp eye and some amount of misdirection to succeed.

A cooperative game can be a great fit for a medium size group especially if there is a traitor. Shadows over Camelot has up to 7 players taking the roles of King Arthur’s Knights of the Round Table and working together to defeat the evil of Mordred and Morgana. Before the game starts loyalty cards are deal out and the player with a traitor card must secretly try to thwart the efforts of the knights. This is a great game to introduce a traitor role to new gamers.

Groups in this range are usually at a convention of some sort of retreat. Managing a group of this size can be unwieldy but a good moderator can use a game to wrangle a wild gang into a fun collective unit. These games can be super fun and are a great way to meet new people.

Ultimate Werewolf can handle handle 60+ players which is not likely to be the case anyone really but, with a player count of 10-20 this game is played at several conventions and team building work shops. Ultimate Werewolf has players secretly taking roles of werewolves or townsfolk and trying to determine who is to be trusted and who might not make it another night. Each “night” the werewolf team chooses a member of the group they want to eat/maul and remove from the game. Each “day” the village finds out who is missing and then votes who they think are the werewolves. The vote results in one member of the group being “lynched”. The day and night sequence happens until either the werewolves are killed or the number of townsfolk is equal to the number of werewolves.

Two Rooms and a Boom is a fun bluffing game that easily handles up to 30 players. Players separate into red team and blue team each with their own room or area but starting with a mix of each team. Each round a certain number of players are swapped between rooms. The blue team has the President and the red team has a bomber. If the president and the bomber are in the same room at the end of five rounds, the red team wins. If not, then the blue team wins. There are several different role that can be used to gather information or fuel misinformation. Two Rooms and a Boom is easy to learn and pretty fast even with a super large player count. Great for team building exercises.

So if you have a large group and don’t want to split up into a bunch of smaller groups, try one of these titles and see how it goes. There are a growing number of titles in this large player category so get out and try a few.