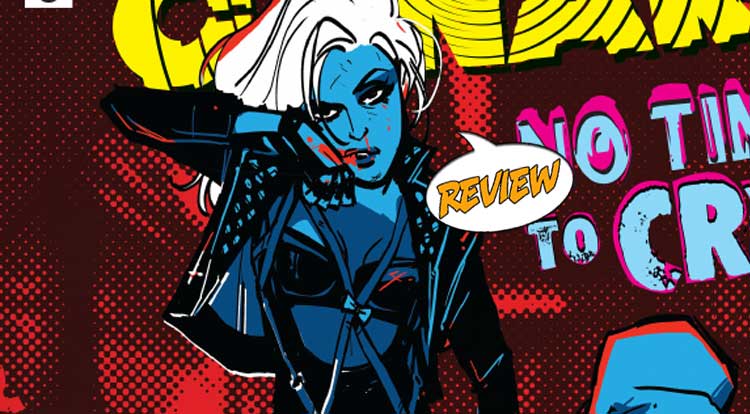 It’s a battle of the bands, as Black Canary and her group once again take to the stage…

But this time, the emphasis is on “battle.”  Your Major Spoilers review of Black Canary #6 awaits!

Previously in Black Canary: Having left Burnside and Batgirl behind, Dinah Lance has taken up a microphone as the lead singer of the band Black Canary (which could be a bit confusing as we recap the issue.)  Unfortunately, the old lead singer, Maeve, still has a chip on her shoulder, and their musical confrontation will not wait any longer…

The issue opens with a stone-faced Dinah riding in a limousine with some unknown suits, all of whom are clearly nervous about her presence.  Dinah informs them all that, if she doesn’t like the answers she gets from their boss, the beatings will be quick and severe.  Flashback to the recent past, where we find Black Canary preparing for a gig, a battle of the bands with Maeve and her new combo.  We find out a little bit about mysterious guitarist Ditto (who is able to communicate by drawing a waveform freehand that her bandmates are able to scan with a smartphone and play back), before launching into a sequence of band-to-band combat, where Maeve’s new partners show off their own super-powers.  (Whether or not Amanda Waller is behind them getting said abilities is left uncertain in the issue.)  As things escalate, Maeve uses her new sonic scream to combat Dinah’s sonic scream, leading to a massive backlash explosion that leaves Ditto and Dinah’s ex Kurt missing, presumed disintegrated…

The issue’s cliffhanger leaves things uncertain for Kurt and Ditto, but the real star is Annie Wu’s art.  The combat sequences feature clever blocking and use of musical structure (including one three-panel bit where Dinah punches a specific rhythm into someone’s face, with the art showing the bars of the song she’s “playing”), and the buildup to the big explosion is wonderfully dynamic drawing.  Sadly, the coloring isn’t quite as good, to my eye (though the color-boding of Maeve and Black Canary during the battle makes for great contrast) with certain sequences suffering from a little too much orange/blue tint for me.  Still, it never gets in the way of the storytelling, and where the coloring works, it works well.  The difficulty with this issue for me comes in trying to figure out everything that happened, even having read everything that led up to this point, but it’s still interesting to find Black Canary at the forefront of an exciting, off-beat musically-oriented story.

Even with the plotting issues (with possible time travel?), this issue is still pretty entertaining, with a little ‘Jem And The Holograms’ action thrown in, making for some satisfying story before the ‘BwaHUH?’ final page.  Black Canary #6 gets by on the strength of its art and a clever action sequences, earning a better-than-average 3.5 out of 5 stars overall, and even with the confusing ending, I want to come back next issue to find out what’s happening…

A literal battle of the bands and some killer art, offsetting some confusing plotting...