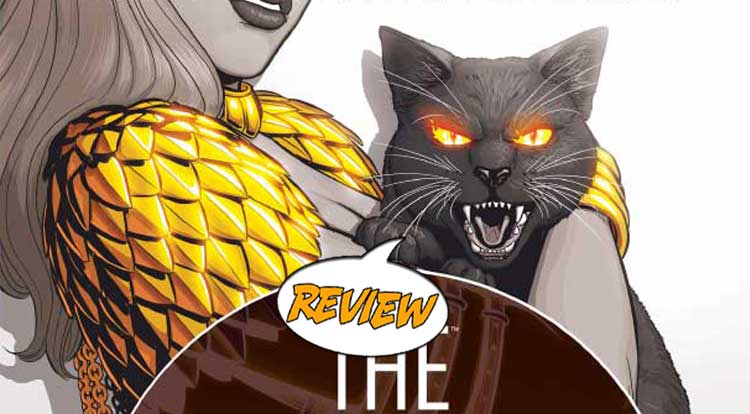 The Wicked + The Divine #17 Review

Sakhmet takes center stage, but what makes her so different from the rest of the pantheon?  Your Major Spoilers review of The Wicked + The Divine #17 awaits! Previously in The Wicked + The Divine: “Every ninety years, twelve gods return as young people.  The are loved.  They are hated.  In two years, they are all dead.  It’s happening now.  It’s happening again.  Lucifer was framed for the murder of a judge, and was killed during her escape from prison by Ananke.  Fangirl Laura and god Innanna investigated a possible conspiracy, but were murdered by Ananke and Baphomet respectively.  Inanna’s ex-lover Baal, managed to capture Baphomet’s lover, The Morrigan.  Tara committed suicide, only for Ananke to destroy the suicide note and frame Baphomet.  Unknown to all, Woden conspired with Ananke…

AND it was Ananke who killed the Judge…

AND Woden believes Ananke will be killing again soon.

Most recently, Baphomet sneaked a message to Morrigan, saying that he can explain everything.  Life goes on.”

This arc of Wic/Div has been all about the character work, delving into the personalities and backgrounds of the thus-far supporting characters, and giving us bits and pieces of their story.  On that level, this issue is a little bit disappointing, as it doesn’t so much delve into Sakhmet’s past as have her (in-universe and in-character) repeatedly deny that her past has any bearing on what she does now.  Much of the issue shows us Sakhmet’s life, a whirl of sex and food and spectacle, with little to no focus on anything other than instant gratification.  Of course, she’s a cat, essentially, so it’s all perfectly appropriate, if somewhat less than illuminating.  Worst of all, we find that Sakhmet’s constant inebriation is also part of the game, as a sober Sakhmet is as willing to kill (and eat) her prey as the cats she aspires to be, leading to a horrifying sequence halfway through the issue that really underlines how different the twelve are from the normal man or woman in the street.

The issue ends with The Morrigan revealing to a passed-out Sakhmet that she already knows how she is going to escape from Ananke’s prison, leaving us with the expectation that the next arc of Wic/Div will likely have more of the fighty-fighty and the carnage and the GLAYVEN...  Each issue of this arc has featured a guest-artist (save for one page short stories done by regular artist/co-creator McKelvie) but Brandon Graham may be the artist further from McKelvie’s smooth and expressive linework.  Still, his ragged edges and heavily lidded eyes are very appropriate for a book featuring Sakhmet, and with the exception of a few wide shots, contained enough detail and texture for my tastes.  McKelvie’s single-page story at the end teases another possible big reveal to come (after a slight production delay to get everything squared away and the trade of this arc released and such), making this one of the strangest and most oblique issues of an already strange and experimental comic series.

THE BOTTOM LINE: SOMETHING DIFFERENT

This arc of the book has been wryly titled ‘Commercial Suicide,’ and on the face of things, it’s easy to see why it might fit.  Taking a book known for a specific style of art and replacing that art with a rotating slate of guest-artists could have been a knockout blow for a young series, but Gillen & McKelvie have enough of a foundation under these characters and their world to make it all work.  The Wicked + The Divine #17 is a change of pace, not only from the book as a whole but from this unusual arc, and it sets up the central conflict of what comes next, all the while telling us everything (and nothing) about one of the most elusive of the gawds, earning a very solid 3.5 out of 5 stars overall.  I wouldn’t jump onto this book with this issue, but if you’re invested (or prepared to get invested), this issue makes a good impression…