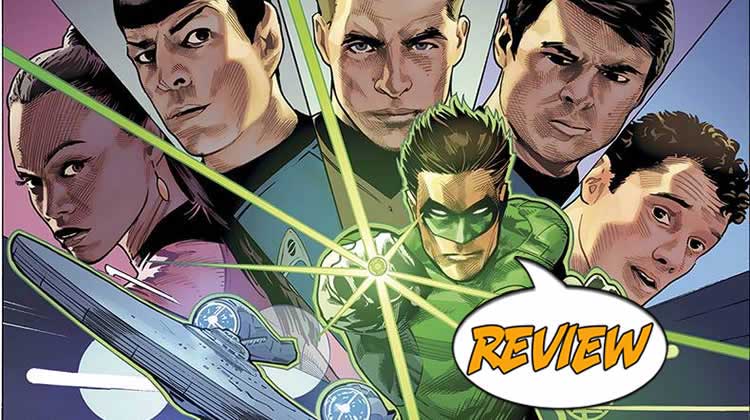 Of all the Star Trek comics crossovers, this one was the most unexpected to me. Granted, the time has come when special effects could make this happen on TV or in the movie theater. Still, I was really surprised when this team-up of Star Trek and Green Lantern was announced. Based on how others have reacted, I’m not alone!

This miniseries concluded last Wednesday, and I really enjoyed the finale a lot!

Previously in Star Trek/Green Lantern: “It’s the final chapter of the crossover event of 2015! The dead have risen. Heroes have fallen. The last survivors of Starfleet and the Lantern Corps join together to fight the greatest threat the galaxy has ever known. Who will be left standing? Don’t miss the shocking events that will change the future of both franchises forever!”

One of the most enjoyable parts of this miniseries has been seeing just who in the Trek universe gets what color power ring. I won’t spoil any of that here – you should really pick up these comics anyway – but I do have to say that several were really unexpected. Also, who did NOT receive rings was also, shall we say, “fascinating!”

Although Captain Kirk is surprised by what the power rings can do, their abilities are in sync with what current sci-fi has in mind. Also, the rings are those created by Geoff Johns, who updated GL quite a bit. It used to be that one ring run on will power was considered too much. Then Johns developed a whole spectrum of rings, each powered by something else. A well-known example is the yellow ring, which is run by fear.

Another engrossing part of this story is the list of guest stars. Hal and Ganthet appeared in the first issue as well as several well-known names in Trek. As each issue has unfolded, we’ve been exposed to what could happen in the Trek universe if members of the GL Corps had arrived there. Pretty surprising to me!

Mike Johnson’s script has had great pacing and several shocks as we moved along from issue to issue. His grasp on the crew of the Enterprise and their nemeses has been a great place to jump off from. He’s also done a terrific job with the various GLs and ring-bearers of various colors from the DCU.

I also like the art, which is able to handle both the sci-fi and superhero aspects of what’s going on. Good expressions (even on the aliens) as well as action sequences that blew me away! This issue is a perfect example as the resolution hits, and it make perfect sense to me!

Some fans may grouse that one group figured out how to resolve the situation while the other mainly helped. That didn’t bother me given that over the past six issues, both groups attempted to learn about each other. One had more to learn, so I’m not surprised that things worked out the way they did.

Oh, and the person who was the center of the resolution was ideal! After all, the color spectrum had to do with emotion, right? Well, the person who could manage all those emotions really worked for me. I won’t reveal just who that is, but I figure it’ll make sense to you once you read it.

I’ve mentioned previously that I’d like to see more of this crossover in the future. Given how the miniseries wrapped up, we have a whole new universe to explore, and I’d love to see more of it!

Whatever the next Star Trek crossover is, I’ll be comparing it (and all other ones) to this miniseries. It was a high-octane sci-fi event that I will be recommending to people for years to come!

If you didn’t get to read it, I’d say catch up digitally or get the trade if they release it soon. I hope they do so it can be added to my collection!

Two diverse science-fiction universes collide, and not everything returns to "normal" when it's over!