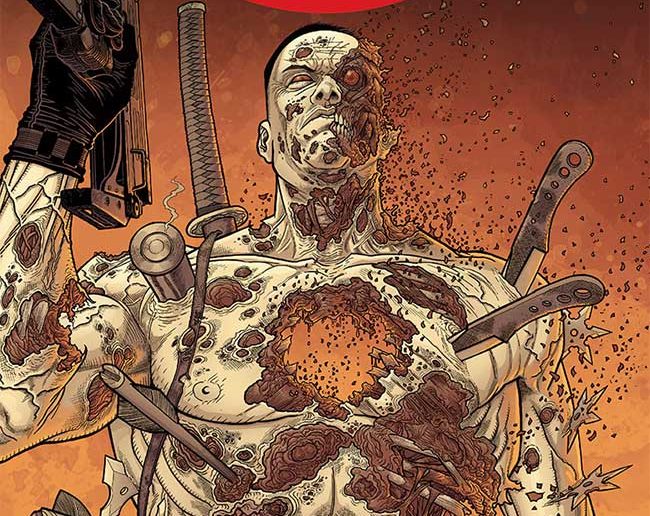 By Stephen Schleicher on December 9, 2015 0 Comments

Valiant Entertainment has announced that Jeff Lemire and Kano will take on the creative duties for the upcoming Bloodshot Reborn 2016 Annual #1.

BLOODSHOT REBORN 2016 ANNUAL #1
Written by JEFF LEMIRE with RAY FAWKES, MICHEL FIFFE & BENJAMIN MARRA, and PAUL MAYBURY
Art by KANO with RAY FAWKES, BENJAMIN MARRA, and PAUL MAYBURY
Cover A by KANO
Cover B by RYAN BODENHEIM
Variant Cover by ROBERT WILSON IV
Variant Cover by KERON GRANT
First: Terror doesn’t wait for Friday at Camp Silver Lake in an extra-sized tale of summertime mayhem from Jeff Lemire and Kano! A masked menace has stalked this camp for years, but what happens when one unstoppable killing machine comes up against another? Bloodshot is about to bring his bloody brand of justice to the quiet shores of Silver Lake to take on America’s most notorious slasher!

Then: Jeff Lemire presents a very special Bloodsquirt solo adventure, alongside all-new stories from Fawkes, Fiffe & Marra, Maybury, and more! From his classified past to the post-apocalyptic future of “THE ANALOG MAN” and featuring the first glimpses of major milestones coming for Bloodshot in 2016 and beyond, duck and cover when the BLOODSHOT REBORN 2016 ANNUAL #1 reveals 64 pages of never-before-told tales for Valiant’s nanite-enhanced agent of destruction!