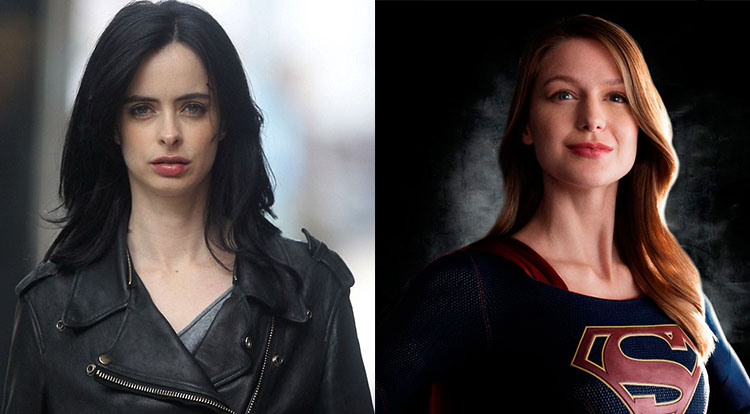 What a great world we live in! Both Marvel and DC have television shows out right now led by female characters and supported by African American men. This is a much needed strike for diversity in the ever changing landscape of contemporary media. That’s probably a cliche phrase that seems obvious to the reader, but I want to start this editorial off with a positive.

HOW COOL IS THAT?

I watch both Jessica Jones and Supergirl. I’ve reviewed them both. Both shows have incredible good things about them and both shows have some things that aren’t necessarily to my taste. You know, like every television show that there ever was – The Leftovers, Ash Vs The Evil Dead, Star Wars: Rebels. The amazing this about Jessica Jones and Supergirl is the sheer amount of scrutiny that both shows are under.

Supergirl is popularly referred to as “Girl Flash”, which is definitely true. The Kreisberg/Berlanti machine makes television shows under a certain formula that fans across their serieses can pick out – it’s not that subtly done. The problem with that qualifier is that nobody is looking to Legends of Tomorrow and calling that “Time Traveling Supergirl”. Why does WB’s female show require qualification through comparison to one of its MANY male led counterparts? To Marvel Entertainment’s credit, nobody seems to be describing Jessica Jones are “Girl Daredevil”, but Marvel is about to enter PHASE THREE of their Cinematic Universe and there hasn’t been a female-led film yet. Some people like to split hairs and talk about Black Widow’s contributions to Captain America: the Winter Soldier, but let us all face facts like adults: the movie isn’t called Black Widow. It isn’t even called Captain America and Black Widow. It’s called Captain America: the Winter Soldier named for the two male leads – one of whom is spectacularly executed, but has less than twelve lines in films total 136 minutes.

Let’s set those facts aside and be proud, once again, that Supergirl and Jessica Jones exist (and Agent Carter, but we’re going to leave that out for the rest of this editorial, despite the fact that it’s fantastic), and are both sharing airtime on prominent media platforms … so why is there a dispirit gap in the fanbases?

Across social media platforms a battle of opinions has been waging. Some would probably like to lump it in with the typical DC versus Marvel fandom debates that are presently swirling around the Batman V Superman and Civil War, but it feels somehow more mean spirited than the normal mud slinging across alliances … because we’re shooting down two properties that are important steps forward in striking for diversity in the ever changing landscape of contemporary media. (Remember that from the top of the page?)

An artist and friend of mine, Caitlin Bridges expounded excellently on the topic recently and I’m going to borrow her analogy now:

Jessica Jones brings the hard edge and true facts of what day to day life as a woman is. Not what it can be. What it is – believing otherwise is naive, whilst Supergirl is a beautiful reminder of the potential we can reach despite anyone else’s reservations. Both hold incredibly important messages and they package these polarizing worldviews in vastly different aesthetic because the world we live in and the societies we inhabit are diverse in and of themselves. I’m not asking you to like both Jessica Jones and Supergirl. I’m not even asking you to watch them. You can really do whatever you want. I’m asking you to understand the amazing gift that both of these shows are for the marginalized people they represent by relaying what is ultimate – through both heroes and their compatriots – a message of hope. There is a long way to go from Jessica Jones and Supergirl where representation is concerned (where’s my Misty Knight series? Where’s my Batwoman series? Cassandra Cain? Silk? Hulking and Wiccan? Miles Morales?), but these are such profound steps in the right direction and it would behoove geeks and nerds as a society with a vastly profound influence on popular culture, presently, to support bolds shifts like this to our media landscape.
Plus, Krysten Ritter and Melissa Benoist have handled this false rivalry with great grace on their respective social media accounts, speaking to the fact that they are both excellent role models who deserve the role they are playing amidst such profound scrutiny.