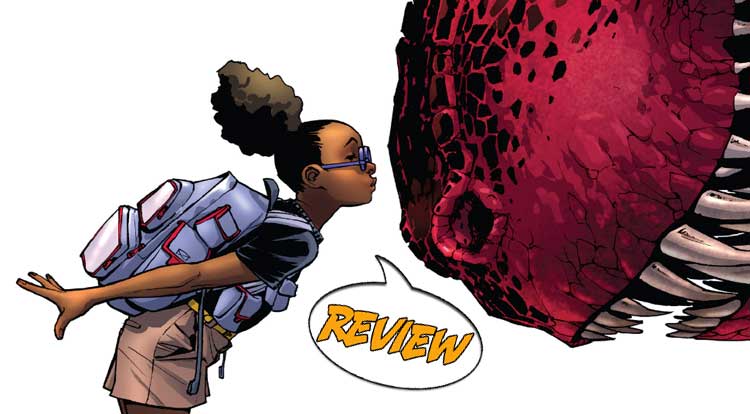 Devil Dinosaur is back, with a new best friend, and this time?

He’s in the present...  Your Major Spoilers review of Moon Girl And Devil Dinosaur #1 awaits! Previously in Moon Girl And Devil Dinosaur: Originally created by Jack Kirby during his third run at Marvel Comics (the same time period that brought us The Eternals, Machine Man, The Celestials and the tragically unpublished adaptation of Patrick McGoohans magnum opus, ‘The Prisoner’), Devil Dinosaur originally lived in the strange land called ‘Dinosaur World.’  This has shifted and changed, with him occasionally existing the actual past of 616 Marvel Earth, as well as time-tripping back and forth and, at one point, joining the ranks of the Fallen Angels.  (It was the 80s.  Everybody was in an X-book in the 80s.  Just roll with it.)  But, with the recent upheavals in the multiverse, what’s the deal with Devil D today?

TRAPPED IN A WORLD SHE NEVER MADE

This issue begins with our Moon Girl, Lunella Lancaster, hiding under a blanket while she uses various odds and ends to create her very own “Kree Detector.”  When reminded that she’s going to be late for school, she rushes off using another of her gadgets, racing to beat the bell and barely making it to her science class on time.  The issue shows us a very intelligent, very frustated young woman, trying to get by in high school while hoeing to get into a school that really matters, reminding me for all the world of the early Spider-Man tales, where young Peter Parker is tormented by jerk Flash Thompson.  She can’t quite explain to her family what’s wrong, but when she tests out her Kree Detector, it actually WORKS, leading her directly to a lost artifact (presumably of the Inhuman attacks), an omni-wave projector.  That selfsame device, or one like it, once broke the universe and created a two-way portal to the Negative Zone, from which Rick Jones and Captain Marvel switched placed back in the Bronze Age.  When this one goes off, it creates a portal to…

…wherever Devil Dinosaur is?  Having just seen his friend Moon-Boy killed over the O.W.P., Devil chases the attackers through a portal and right into modern-day Manhattan, and as the issue ends, he is stalking the streets with Lunella carefully held in his powerful jaws.

THE REAL DEAL, IF THAT MATTERS TO YA

There is backstory given about Moon-Boy’s seeming demise, and the story makes clear that this is the same Devil D we’ve been reading about (Okay, the same Devil D that Otter Disaster and I have been reading about) since ’78, which ameliorates a little bit of the torment of my inner fanboy.  I like the art throughout the issue, especially the way Lunella and other humans are just a tiny bit exaggerated/cartoony, while the backgrounds (and giant red Tyrannosauroids) are photo-realistically rendered.  There is a clear attempt in this issue to synthesize another Kamala Khan-type character, noticeably in showing us how quirky and how smart Lunella really is, but that calculatedness doesn’t do too much damage to the overall story.  With its focus on personality and Lunella’s world, the issue reads very quickly, which can make it feel somewhat slight as a full issue, but it is a successful first issue for me, establishing the how, why, where and setting the stakes for our main characters.

All in all, this issue shapes up to be pretty okay, even with the death of Moon-Boy in these pages, and the idea of Devil Dinosaur once again in modern New York City is one that should have some fun ramifications.  Moon Girl and Devil Dinosaur #1 is well-drawn, with some wobbly story bits wrapped up in enough charismatic character work to make them palatable, as well as some respect for the works of Jack Kirby, earning a solid 3 out of 5 stars overall.