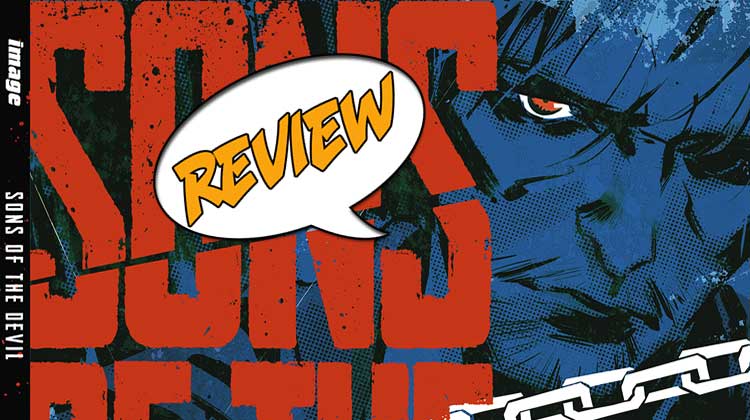 Sons of the Devil Book One Review

Cults are one of those things that truly scares me, even in this “enlightened” age! I think that’s because given the right circumstances, just about every one of us could find the loss of individuality to gain safety something we’d agree to. And that’s frightening!

What this comic does is explore one such cult, and in an era when we like to think NOTHING will set us back on our heels, this book sent shivers up and down my spine!

Previously in Sons of the Devil: “From New York Times Best Selling writer BRIAN BUCCELLATO and artist TONI INFANTE comes a psychological horror story about Travis, an average guy trying to get by, who discovers that he has familial ties to a deadly cult. Told across three decades, Sons of the Devil is an exploration of cults, family and the dark side of human nature. It’s True Detective and Orphan Black meeting Helter Skelter. Collects SONS OF THE DEVIL #1-5, Major Plot Point: Contains an original story showing Jennifer’s journey from year old cult member to her present day allegiance with David Daly.”

People who write crime drama best tend to be those interested in the darker aspects of human behavior, I think. After all, if we read what we’ve seen before, why bother with the book?

One of my favorite crime drama scribes is Brian Buccellato, who seems to know exactly where I’ve been before and goes way off in another direction. I really love that!

One of the cool things about Buccellato’s writing is his ability to get inside the heads of characters and show us that they’re pretty much like the rest of us, even the craziest of them. I’m always amazed at how similar we all are, even those who live in the blackest regions of the human psyche.

That brings us to this comic. Sons of the Devil is about a family that seems to be drawn to a specific cult with no way to resist it. In this first issue, the focus is on Travis, who tries to do good by people, but it never seems to work out. Early in the story, he helps a lost boy only to get to work late (again). This launches him into an argument with his boss that gets him in serious trouble not only at his job, but also with the authorities. That says a lot about his character – that and his blue left eye and his red right eye. Yikes!

Buccellato also hints at the “nature versus nurture” controversy – do we do what we do because it’s written in our genes or does it happen because of our surroundings? This book talks about that quite a bit!

When I interviewed him for my podcast about how this book came to be, Buccellato talked about how cults have both scared and fascinated him. I can relate in that he’s talking about human nature and how individuals can be influenced by groups, particularly those with charismatic leaders.

He also touches on a subject that I don’t deal well with, and that’s death. When Travis has to attend a funeral and burial, I remember the passings of my Mom and Dad, and how things are never quite the same after those events. Again, how this affects the main character moving forward will be intriguing to me.

Then, too, I find the subject of orphans unsettling. The friends I’ve had who were raised as orphans never quite seemed as content or happy with their lives, and their behavior was somewhat unnerving to me. They seemed to struggle with who they were. I’m sure that was mostly an experience unique to the folks I knew, but it added a layer of emotion to this comic.

Also, the children spawned by the leader of the cult share Travis’ eye colorings as well as his attraction to the darker side of human nature. When Travis meets his half-sister, he sees a lot of himself in her, and it leads to death and destruction. More than that, I won’t say!

I also liked the “Jennifer” story at the back of the trade. It answered some questions I had about what happened when. Does it make it creepier that the writer of the story is named Jennifer Young? Yes, it does!

I find Infante’s art appropriate for the subject matter, but it was a little sketchy at times. Still, he establishes and maintains the mood I’m sure Buccellato is searching for.

I do like how Infante handles action and violence. I had to cringe when people are fighting as well as some arguments that break out in an encounter group for orphans. You could feel the tension from panel to panel!

One of my favorite sequences happens early in the book. When a young child is being held and an attempt is being made to get him from the cult’s compound, we don’t see his eyes until he’s watching someone getting beaten to allow him to leave. Cah-reepy! Well done!

Also, Bergara’s art matches the illustration from the previous issues, which made this volume a strong one to me.

BOTTOM LINE: Creepy Is As Creepy Does

Horror is one of those things that has to work well in order for me to buy into it. Otherwise, I just don’t get it! I had to make sure I was reading Sons of the Devil in a lit room because I’m sure diving into it in the darkness would have made it tough to read it all.

This comic is the result of a successful Kickstarter campaign and working in conjunction with OSSM Comics, one of my favorite comic- producing companies. I appreciate Image bringing this to the local shops, and I highly recommend this demanding and gripping title! It’s one of those books you just can’t put down! When I reached the last page, I craved more! It’s that good!

Sons of the Devil Book One

When I reached the last page of Sons of the Devil Book One, I craved more! It’s that good!