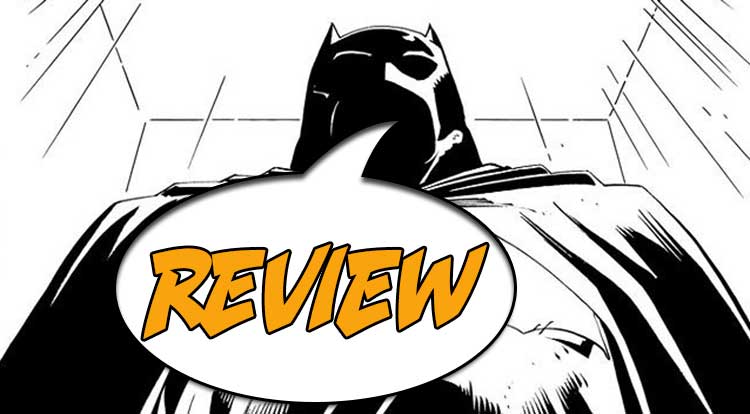 Previously in The Dark Knight Returns: Batman’s return causes a resurgence in superhero worship, and when President Rickard orders Superman to take Batman down for good, the heroes rise up to take back the world… or something like that. The Dark Knight Strikes Again was not well received and has generally been panned by critics and readers, which makes Dark Knight III: The Master Race something that is on everyone’s radar.

Previous Dark Knight series have focused on political and societal woes through the mouths of the characters on the page.  And like previous books, “Batman’s” return in DKIII, is the result of those woes – in this case police brutality against a black man, which sparks the Dark Knight’s attack on the Gotham police force. The resulting fallout brings forth familiar characters like Commissioner Yindel, Wonder Woman, Carrie Kelly and Superman’s daughter Lara, while other heroes, like The Atom, are forced to deal with small problems that may explode into bigger woes as the series progresses. Instead of drawing out the manhunt for the Dark Knight, the vigilante is taken down in a most brutal way, and the final panel of the main story will have you in shock.

Azzarello and Miller’s world closely mirrors our own; heroes are treated as myth, the police rule as brutal thugs, and media commentary provides both sides of an argument that feels all too familiar. These elements are exactly what made The Dark Knight Returns such a wonderful  piece of work, and because Azzarello and Millar are using those core elements as a basis to tell this story, it doesn’t feel like a retread of what has come before, but rather a tone that flows through the three Dark Knight volumes. Dark Knight III: The Master Race #1 floods the reader with deep thoughts about who we perceive as heroes and how those heroes are treated. Television commentators are more direct likenesses to the real world counterparts than they were years ago, which makes the split between conservative and liberal viewpoints more obvious. This, in turn, will ruffle more than a few feathers when the eight issue series finally wraps.  While the story is a collaboration, readers will quickly see Miller’s harsh commentary and Azzorello’s hard action combine to create something that brings forth the best of both while smoothing those jagged parts that poke reader’s in the wrong ways.

Beyond commentary on current events, I love the quiet moments where The Atom and Wonder Woman reflect on their role in the world, and how they should be treated or treating others.  Even the sight of Superman in his Fortress of Solitude make us wonder what the heroes are thinking, and it is the frustration of all the characters introduced that make this first issue so well done. Before it is all over, I expect everyone’s emotions and turmoil  to explode in an amazing way.

If Azzarello is channeling the best themes and ideas from previous volumes, Adam Kubert does a fantastic job of capturing Frank Miller’s style. Granted, Janson is inking Kubert’s pencils like he did with Miller’s, but here we can instantly see what panels are going to become the screen savers, wallpapers, and iconic art for the next generation of comic readers. When needed (like the unmasking of the vigilante in the last two pages), the style is totally Miller’s early ’80s vibe, while other moments, like the Fortress of Solitude sequence, feel like Kubert all the way.  Like a child who takes the best parts of the parents, the art in The Dark Knight III: The Master Race is a hybrid of decades of refined work that compliments both.

There are moments in this issue that are extremely brutal to look at (in a good way), and moments that make you stare at the old gods in wonder. The fight sequence between Wonder Woman and the minotaur, and the reveal of what she is carrying on her back through that fight is a testament to planning and layouts that result in a satisfying and somewhat shocking revelation – a revelation that may have more going for it than we are lead to believe.

BOTTOM LINE: A BOOK WORTH BUYING

As much as DK2, and All-Star Batman and Robin soured a lot of comic fans on Frank Miller’s opus, Dark Knight III: The Master Race feels like the comic book we need and deserve.  A magnificent opening chapter, The Dark Knight III: The Master Race #1 is a book that even the most closed minded and cold of heart should check out. I’m in for the full ride, and can’t wait to see what happens next.

A magnificent opening chapter, The Dark Knight III: The Master Race #1 is a book that even the most closed minded and cold of heart should check out. I'm in for the full ride, and can't wait to see what happens next.