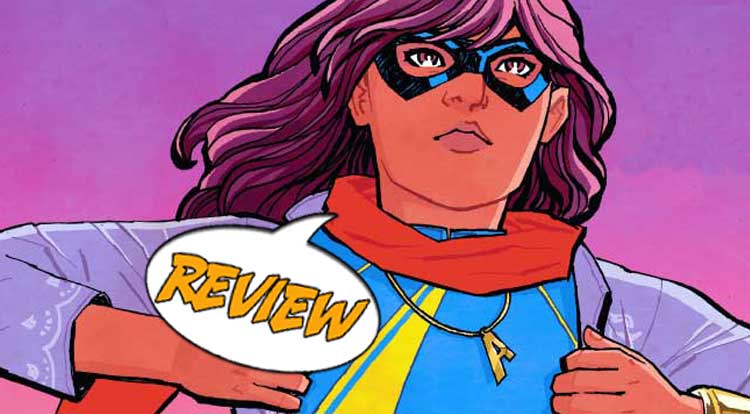 Kamala Khan has returned home from the Secret Wars, but now that she’s an official Avenger, things are a bit different from the way they were before…  Your Major Spoilers review of Ms. Marvel #1 awaits!

When we last saw Kamala, she and nearly everyone in her Jersey City neighborhood had gathered to weather out the apocalypse in the high school gymnasium, after which…

…well, the world ended.  Fortunately for us, it didn’t take, and the as-yet-still-unseen ending of Secret Wars left her back home and back to normal, sort of.  In the interim months, though, Kamala has made it to the ranks of The Avengers, and this issue opens with a wonderful sequence showing her working to balance her career as front-line superhero with high school and a social life, a balance that ends up short-changing the “social” part.  Much has changed for Kamala’s neighborhood, as the school has been rebuilt better than ever (thanks to a grant from Tony Stark), new developments are springing up, and most distressing of all, her best friend Bruno has a new girlfriend.  (You remember Bruno, the last time we saw our hero, they were admitting that they might love each other after all.)  That is only part of the distressing change this issue, as Ms. Marvel finds her image being used as the public face for a very sinister group of folks intent on gentrifying her old neighborhood…

THE OLD MAGIC IS STILL HERE

This issue is pretty great, focusing as much on the minor changes in Kamala’s life as it does on the giant upheavals, and making the clear case that the quiet loss of her corner grocery (and, of course, Bruno macking on new girlfriend Mike) is perhaps more distressing than the huge adjustment of being an Avenger.  It’s nice, and the fact that the issue’s art is split between the Alphona and Miyazawa, Ms. Marvel’s two regular artists, feels right.  Best of all?  We aren’t expected to hate Bruno’s new girlfriend, reminding me that Willow Wilson has made her name on defying expectations with this title.  The art is lovely, as usual, especially the touches like the inside of Radu’s pickup truck (which kind of has to be seen to be believed) and the subtle emotions in Bruno and Kamala’s faces as they discuss the elephant in the room.  There’s also a giant frog to fight, if you’re into that sort of thing, and a lot of new story springboards to carry Ms. Marvel forward into the all-new, all-different Marvel Universe.

Much like Thor, this volume successfully picks up where the last one left off, using the upheaval of Secret Wars to make logical changes, and play with the mystery of what we’ve missed a little bit, without losing the strong narrative that made the earlier volume successful.  Ms. Marvel #1 is the perfect jumping-on point for a new reader, showing you all you need to know about the hero and her world, but also a seamless continuation of that which has come before, earning a very impressive 4 out of 5 stars overall.  It’s a good’n, and you should go read it…