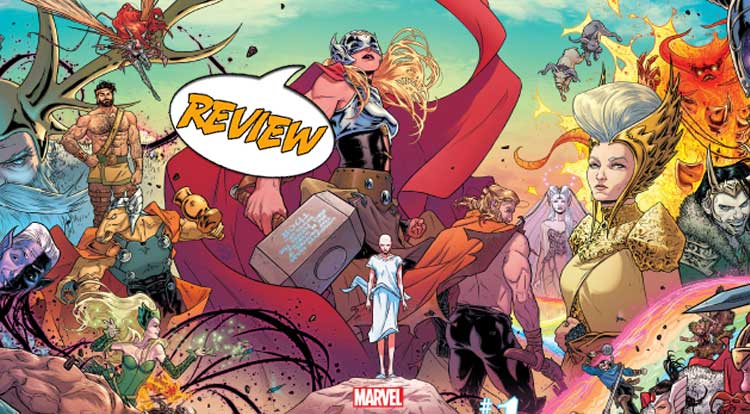 Her identity is no longer secret, but the problems that face the new Thor haven’t diminished…  Your Major Spoilers review of The Mighty Thor #1 awaits!

Previously in The Mighty Thor: “When Dr. Jane Foster lifts the mystic hammer, Mjolnir, she is transformed into the goddess of thunder, the Mighty Thor!  Her enemies are many, as Asgard descends further into chaos and war threatens to spread throughout the Ten Realms.  Yet, her greatest battle will be against a far more personal foe: The cancer that is killing her mortal form…”

I’ve been pretty happy with the state of the All-New, All-Different Marvel books, finding lots to love in the recasting and revampings we’ve seen post-Secret Wars, but this book is probably the one that I’ve been looking forward to the most.  The last issue of the previous volume finally revealed that Thor is actually Jane Foster, but this issue really take the time to delve into what that means.  We open with Jane’s first-person descriptions of chemotherapy (which are quite accurate to the real-life version, I will tell you) as well as a few real-world parallels that brought a smile to my face (such as Roxxon’s 24-hour-a-day spin channel, ‘Roxx News’.)  We even find out the reasons why Jane is doing so poorly in her battle against her disease: Every time she picks up the hammer, the chemotherapy drugs are purged from her system by the transformation.  It’s a Catch-22 that we see in action, as Thor is once again called into action by the appearance of hundreds of dead elves falling from the upper atmosphere, clearly the work of Dark Magicks (and just as clearly the handiwork of Malekith.)  This issue skillfully shows us many perspectives on Jane’s life, from the intolerance of Asgard, to the esteem of her fellow Avengers, and even her duties as a member of the Congress of Worlds in Asgard…

HOW CAN HIGH FANTASY HEROICS BE SO TOPICAL?

Aaron expertly weaves parallels to real-world events into the stories, with the Congress of Worlds deadlocked by ideological differences, an atmosphere of fear causing everyone to act foolishly, and Odin himself refusing any counsel or dissent, to the point where he has locked his own wife away for treason.  Thor is considered a criminal and a thief, while the other Thor, the Odinson, is nowhere to be found.  The issue ends with a shocking-only-in-that-it-took-so-long reveal of another villainous player in the mix (although one that I hope is much more than it seems) and the frustrating realization that Jane can’t hit all of her problems with a hammer.  True to form, Russell Dauterman’s art is wonderful throughout, really adding emphasis to the horrifying experience of a rain of corpses, delivering takes on the usual suspects with lovely new twists (Heimdall especially looks extra-intimidating and cool under his pen.)  On the flip side, his depiction of a cold, sterile chemotherapy bay is perfect, making that mundane moment one of the most disturbing moments in the comic.

In short, this book is excellent, especially as a reintroduction to the adventure of the new Thor, and should serve as a reminder that not all change is bad (especially when it results in some of the most groundbreaking Thor stories in years.)  The Mighty Thor #1 picks up all the threads of what has come before, with amazing art, and an almost supernatural ability to merge extraplanar magical fooferfaw with subtle real-world political commentary and making it all an enthralling read, earning 4.5 out 5 stars.

Picking up where the last volume left off, and raising some new threats as well, it's an excellent first issue.