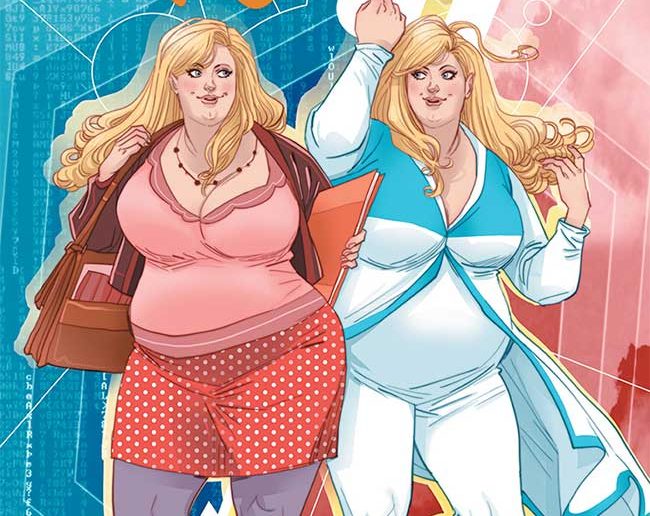 Valiant Entertainment has released our first look at the inside pages of the upcoming Faith #1 series by Jody Houser, Francis Portela, and Marguerite Sauvage.

FAITH #1 (of 4)
Written by JODY HOUSER
Art by FRANCIS PORTELA and MARGUERITE SAUVAGE
Cover A by JELENA KEVIC-DJURDJEVIC (NOV151702)
Cover B by MARGUERITE SAUVAGE (NOV151703)
Valiant x CGC Replica Variant by CLAYTON HENRY (NOV151704)
Variant Cover by KANO (NOV151706)
Variant Cover by COLLEEN COOVER (NOV151707)
Blank Cover also available (NOV151705)
$3.99 | 32 pgs.
Orphaned at a young age, Faith Herbert – a psionically gifted “psiot” discovered by the Harbinger Foundation – has always aspired to greatness. But now this once ordinary teenager is taking control of her destiny and becoming the hard-hitting hero she’s always known she can be – complete with a mild-mannered secret identity, unsuspecting colleagues, and a day job as a reporter that routinely throws into her harms way! Well, at least she thought it would… When she’s not typing up listicles about cat videos, Faith makes a secret transformation to patrol the night as the City of Angels’ own leading superhero – the sky-soaring Zephyr!

But flying solo is going to be tougher than Zephyr ever thought when she uncovers a deep-rooted alien conspiracy. Two-bit burglars and car thieves are one thing, but when the world needs a hero to stave off a full-blown extraterrestrial invasion, will Faith find herself in over her head…or ready for her biggest challenge yet?