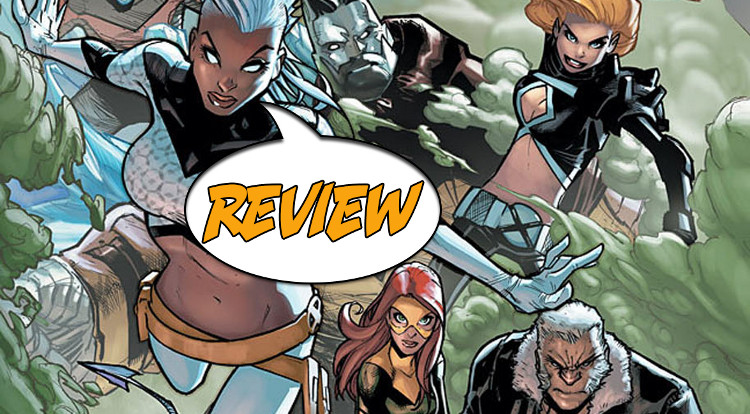 Extraordinary X-Men #1 is here, because Marvel couldn’t even wait until the Secret Wars were done to give you a bold new direction! Presenting the new X-Men, complete with some old, new friends.

Previously, in the world of Marvel and the X-Men: Well, Secret Wars isn’t over yet, but presumably the Marvel universe reforms at the end of it. Good scheduling! Over in the pages of Uncanny X-Men #600, Cyclops’ mutant revolution has ended with the Beast on trial, the original X-Men still in the present, and a nice kumbaya singalong in Washington, D.C.

Extraordinary X-Men is purported to be the new flagship of the X-Titles, following on the heels of Brian Michael Bendis’s work on All New X-Men and Uncanny X-Men. Curiously, I get the feeling that this issue was written before Uncanny X-Men #600, since Storm and her crew talk in hushed tones about “what Cyclops did” – when what he did was hold a perfectly amicable rally. Extraordinary X-Men #1 works to pack up some of the ideas that Bendis came to play with, while introducing a new one. Terrigen Mists have contaminated the entire world, which, for some reason, renders mutants sterile while poisoning them. This inexplicably causes anti-mutant sentiment to rise, so Storm gathers together a team of X-Men to spirit away the remaining mutant population to utopian “X-Haven.” Iceman, Magik, Colossus, and Nightcrawler sign on easily, while (original teen X-Man) Jean Grey is more reluctant. The “will she or won’t she” with Jean Grey is left as a lingering plot element, which seems unnecessary since we know she’s joining the team in the end.

Humberto Ramos has done a great job over on Spider-Man, and I was excited how his style would work with the X-Men. I am disappointed to say that the results are less than expected. His cartoony, rubbery style works best with a masked character like Spider-Man, bouncing all over the pages. Ramos’s strengths don’t work as well with the soap operatic, talky nature of the X-Men. The overly dark coloring of Edgar Delgado doesn’t help the issue. An artist like Ramos is busy by nature, and when the colors get too dark, it makes it hard to see what is happening on the page.

With a new title and a $4.99 price point, Extraordinary X-Men #1 is meant to be a big, bold new start for the X-Men. But rather than delivering a fresh approach, it feels like a re-tread. The idea that Terrigen Mists are sterilizing mutants seems like a retreat to the Decimation-era X-Men, and X-Haven seems similar to the old Utopia idea. Neither plot produced any X-Stories of particular quality, so I am less than pleased to be returning to these wells. It also presents a child abuse aspect to Colossus’s backstory that I don’t recall existing before – if it’s new, it’s not a great add. Lemire and Ramos are both good talents, and hopefully this book will improve. But as it is, Extraordinary X-Men is not off to a great start. For five dollars and for all that build up, readers deserve more.

To be the headliner, you need to bring your best stuff. These X-Men don't.