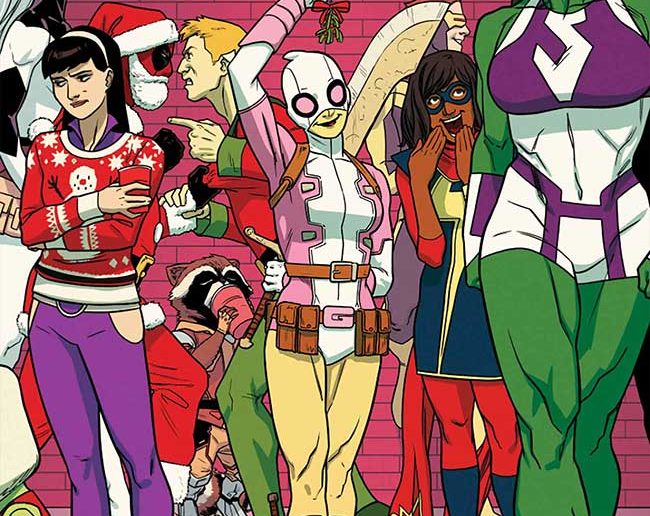 By Stephen Schleicher on November 9, 2015 0 Comments

But that’s not all! Several of those partygoers have their own separate stories of holiday cheer – and you can read about them in this can’t-miss special! Gerry Duggan (Deadpool) and Danlio Beyruth (Howard the Duck Gwenpool back-ups) bring you a tale of two Hawkeyes and the one and only Deadpool as they team up to stop a holiday pickpocket – and try not to kill each other in the process. Then, New York Times Bestselling Black Widow: Forever Red scribe Margaret Stohl teams up artist Juan Gedeon (Ghost Racers) as Kamala Khan battles her most dangerous foe yet – the holiday blues! Finally, the woman of the hour make her appearance as writer Christopher Hastings (Howard the Duck Gwenpool back-ups) and Gurihiru (Secret Wars: Secret Love) bring you a new Gwenpool story! Can she adjust to her new home in the Marvel Universe without killing everyone in it?

So grab some milk and cookies and join us as the merriest creators tackle the ho-ho-ho-iest characters for a holiday special unlike any you’ve seen before. Don’t miss the bombastic GWENPOOL SPECIAL #1 when it comes to comic shops and digital devices this December!